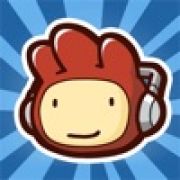 Scribblenauts Remix is a game created by Warner Bros. It costs $.99 and is available on the iPhone, iPad, and iPod Touch.

Scribblenauts has a sandbox mode which allows you to play without solving puzzles, and a mission mode as well. In the mission mode you have to solve puzzles by spawning things such as werewolves, potions, wizards, and anything else you can imagine to help the main character, Maxwell, complete each level.

Spawning things in the game is just a matter of clicking on the notepad icon and typing in the name of the thing you want to spawn. You can spawn animals, objects, potions, and many other things.

While Scribblenauts comes with 50 levels and you can also purchase an extra 50 for $1; the real fun comes when playing in the sandbox.

Itâ??s fun to spawn things like lizards, Scylla, and wizards, and watch them battle each other to the death. You can even spawn objects using adjectives. For example a whale isnâ??t really fun to spawn. But if you spawn a â??giant zombie peaceful military flying rideable red whaleâ? youâ??ll get some unexpected yet fun results. The whale will be mountable by Maxwell, it will have zombie characteristics but it wonâ??t attack anyone, and it will also have guns which it can use to attack things if ordered. Howâ??s that for an iPhone game?

This game has a lot of things to spawn and you wonâ??t get bored of it quickly. The idea of Scribblenauts, the game itself, and the graphics are really great as well.

Thereâ??s a limit on how many things you can spawn at a time. If thatâ??s a problem for you though, you can always buy the PC version for more fun.

For $1 youâ??ll effectively be buying a game that will never get boring. If youâ??re the type of person that would love to battle a â??giant military flying angry volcanoâ? versus a â??tiny angry potent water breathing wizardâ? then this game is for you.

The game is enjoyable by anyone, of any age, of any gender. Youâ??ll have to give it a try to see just how entertaining it is.