Gene is a game that will be on January 31st, 2014. In addition to being available on iOS, it will also be available on Android, Tizen, Windows 8 phone, Windows 8, Linux and Mac. The iOS price will beÂ Â£2.99, which includes the entire game and all 15 levels. No in-app purchases will be required in this game 🙂

In this game, which is inspired by Sonic the Hedgehog, you play as Gene. Gene is an alien that crash-lands on an unknown planet and needs to collect coins in order to fix his ship. Collecting coins isn’t as easy as you would imagine though. The unknown planet Gene travels through is full of enemies, spikes, vacuums of space and dangerous obstacles.

Travelling throughout the planet is done by two directional buttons, left and right, as well as a jump button and mutations button.

Starting levels is really simple, you just enter them from the home world. To successfully complete levels you must collect enough coins, but you can always go back to the home world whenever you want from the game’s menu. The great thing about Gene is that he has six mutations which can be unlocked every three levels. These mutations give him an extra ability, such as being able to plant mines for enemies to trip, or being able to jump higher. Gene can only use one of his mutations at a time though, which can be selected from a mutations menu.

When all six mutations have been unlocked, then Gene will be able to defeat every enemy and access every gem across every level. If Gene loses all his lives after being hit by enemies or falling through space too much, he starts over from a nearby checkpoint. It’s certainly nice to have a checkpoint automatic save, than to start the entire game over when you lose all of your lives.

Just to clarify, you can’t kill enemies by jumping on their head. Gene has to specifically plant a mine and wait for them to trigger it to successfully remove an enemy from the level.

Gene is really awesome and provides gamers with a lot of game-time. Once you complete the 15 level story mode you can play in the free-play mode that lets you reply all of the previous levels, in which you can access new areas with all of your mutations.

I was able to play the beta of this game three weeks before it came out, and I noticed some things that could be improved. Sometimes falling on spikes doesn’t take away a live. Also if you jump up and get squished between a moving platform and a normal platform, you get pushed and stuck in the normal platform.

If you like platformers, especially games like Sonic the Hedgehog or Mario, then this game is really worth it. Even if you’re not the biggest fan of platformers, if this game looks interesting to you, then you should get it. It’s definitely got a lot of game-time and very creative. 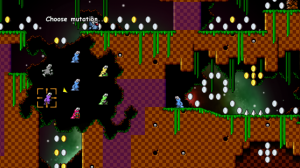 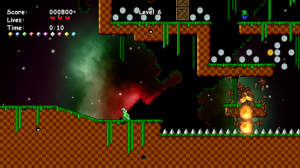 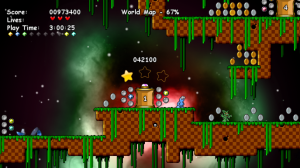