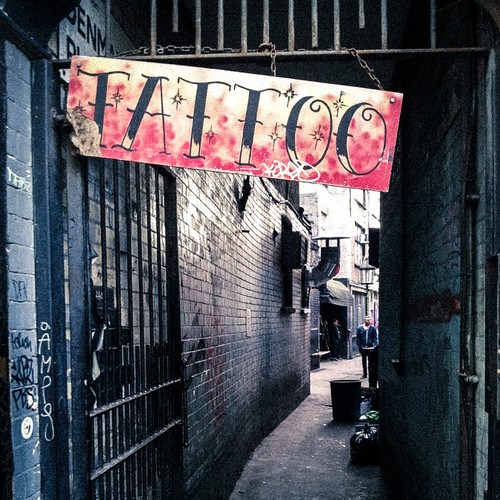 Before the Soviet Union fell in 1991, Russia – and its sovereign states – was not a very happy place.Â While vast improvements had been made in the post-Stalin era, things were still far from ideal. The economy was stagnant, people were suffering, and citizens feared the KGB, or the secret police.

With fear running rampant, the courage to speak up or revolt was few and far between. Prisoners, however, were an exception. Believing they had little to lose, they often rebelled against authorities in their own creative way: Russian prison tattoos.

According toÂ Library of CongressÂ archives, the roots of the Soviet Secret Police can be traced all the way back to the Russian Revolution in 1917. The first secret police, called the Cheka, was instituted to help Vladimir Lenin and the Bolsheviks consolidate their power. In 1922, the Cheka was disbanded and replaced by the State Political Directorate (or GPU). Initially not very powerful, Joseph Stalin reinvigorated this secret police (renaming them the Peopleâ??s Commissariat for Internal Affairs (or NKVD)): as he rose to power, so did they.

One need to look in virtually any history book to see the damage and destruction Stalin enacted: the NKVD were his enforcers. He used them to inflict fear, murder, and imprisonment during the Great Purge.

After Stalinâ??s death, the secret police was again renamed, this time to the KGB. While the KGB was not associated with the level of terror or devastation as its predecessors, it was still used by the Kremlin to silence those who rebelled politically or religiously. Oftentimes, dissenters ended up murdered or imprisoned.

A 2010 article in theÂ Guardian describes Soviet prisoner tattoos as a â??secret language.â? These tattoos were loaded with symbolism and used as a way to broadcast power, disgraces, and hierarchies. They were also used as a subtle way to rebel against prison authorities and the KGB that had destroyed so many lives. Many of the tattoos were anti-Soviet, a result of the Communist era.

Because tattooing was illegal in prison, the ink was made by using blood, urine, and the melted heels of boots. Usually, the tattoos were given only to people who earned them, other times they were involuntary.Â Obscene tattoos, for instance, were often inked onto the skin of homosexuals or people who owed a debt they could not pay (such as those who had lost a card game).

Sometimes, authorities forcibly and surgically removed tattoos from the bodies of their prisoners.

According to theÂ Russian Criminal Tattoo Encyclopedia, the number of tattoos, as well as the image depicted, all told a story.

Crosses on knuckles marked the number of times the person had been imprisoned, while a shoulder insignia noted that the prisoner had been in solitary confinement. A swastika tattoo was not a form of Fascism, rather it was a statement of rebellion, and a refusal to accept the prison rules.

One of the most daring types of Russian prisoner tattoos were worn by people serving life terms. These tattoos, called â??grins,â? typically depicted a Communist leader in a compromising, obscene, or funny manner. This was essentially the prisonerâ??s way of telling the Communists to go jump in Lake Baikal.

Freelance writer Allie Vernon is a freelance writer and aspiring lawyer, currently residing in Houston, Texas. She writes about a variety of legal topics, including prison subcultures and Brazoria County Bail Bonds.