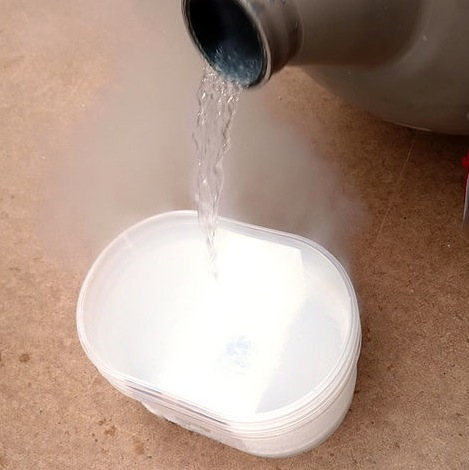 Who in their right mind would ever drink liquid nitrogen? Well, people are drinking it around the globe in cocktail form.

Nitrogen is a gas and is part of the air we breath. By itself, this substance doesn’t have much special about it. Nitrogen isn’t toxic and doesn’t cause adverse reactions, at least in its natural form. But liquid Nitrogen is a state where the gas is cooled down to a temperature so low that it becomes liquid. In this state, it has several interesting properties, and can be used in many fields. The most interesting fact about this type of Nitrogen is the fact that it can cool down other things very quickly.

Liquid Nitrogen is colorless and odorless, which means it’s not only good to use in scientific and industrial applications, but recently has started being used in food as well. Because of its unique properties, liquid Nitrogen boils at -196 degrees in what is referred to as a cryogenic reaction. This will cause most things to freeze on contact, since it’s so cold. In the late 1800s, cooks started to notice that using this liquid could greatly speed up the freezing of foods and drinks. It started becoming used in the preparation of frozen deserts, ice cream, sundaes, and more. Recently, it started being used in the creation of cocktails as well, for the same reason.

By using liquid Nitrogen, cocktails can be cooled down very quickly, and ice can be created with much smaller grains, creating a smoke effect and a peculiar taste. There are however a number of potential problems, making the use of this liquid hazardous. First, liquid Nitrogen is extremely cold. This means that touching the liquid, or being sprayed by it, will cause cold burns or frostbites, similar to being burned by a hot flame. Another potential problem is that because this liquid has an expansion ratio of 1:694, this means it can explode if not kept in a proper container. This type of explosive power can shatter concrete and steel, simply from the liquid expanding back into a gas.

Another potential problem is asphyxia, since Nitrogen will reduce the amount of Oxygen around it as it evaporate. But when it comes to those who actually consume foods or drinks made with liquid Nitrogen, perhaps the most dangerous part is consuming the actual liquid. While liquid Nitrogen can be used safely as part of the cooking process, it must never be ingested. Drinking it is equivalent to drinking burning hot lava. It causes anything that the liquid touches to burn up causing cryogenic burns. As well as burning the inside of your stomach it could actually burn through stomach lining and create holes, putting you in a critical condition.

Recently, there was a story where a woman had to have her stomach removed after drinking a cocktail that contained liquid Nitrogen. This was a very serious operation that will impact her for the rest of her life. This is why it’s very important to make sure all the Nitrogen has evaporated before consuming anything that was in contact with the gas. While this substance is not toxic, the simple fact that it is so cold can cause quite a few problems.

Click here to find out what would happen if you stuck your head into a running microwave.