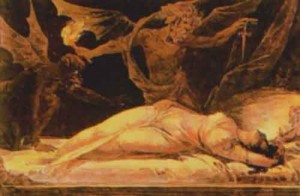 Sleep paralysis is an experience where you wake up but cannot move your body. It happens in between sleeping stages, but most often when falling asleep or waking up.

It is common for these episodes to last anywhere from seconds to minutes. It is also very common for haunting hallucinations to take place where the victim feels impending doom and is helpless. Many researchers also believe that the hallucinations during sleep paralysis are the cause for “alien abductions.”

Sleep paralysis is actually a built in â??safety featureâ? of the brain which makes you unable to move during sleep. It allows you to experience dreams without acting them out while sleeping, so you are able to rest better. Sleep paralysis happens when your body “falls asleep” while you remainÂ conscious; or when you wake up but your body is still paralyzed.

Sleep paralysis runs in families but can also be caused by other factors such as:

Sleep paralysis is often accompanied by narcolepsy; a condition in which a person is always feeling sleepy.

Symptoms of sleep paralysis are commonly described as feeling an evil presence in the room and the feeling of something pressing on your chest. Any movement becomes impossible and you cannot scream for help. Victims of sleep paralysis claim that the effort it takes to try and move or scream is so much that it makes them sweat and their hearts start to race.

It is not uncommon for devilish growling noises to be heard, figures walking into your bedroom, and creatures chewing on your body. Anything from goblins, demons, faceless figures, death, and monsters are likely to be seen during sleep paralysis. Â During the whole time you are completely helpless and it only adds to the fear you experience.

Sometimes people who hallucinate during sleep paralysis will think that they are able to scream for help, and that someone comes over to help them; when in fact they are still fully hallucinating. 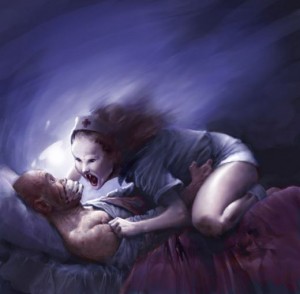 You can try to battle the paralysis but you cannot stop the hallucinations. It is also very hard to remain composed. During sleep paralysis the person is technically conscious but is living a different reality. It is similar to knowing that you are in a nightmare, but you are still scared of dying none the less.

Most people that experience sleep paralysis try to break out of it by moving one part of their body. Wiggling a toe or finger is often enough for the whole effect to break. If that requires too much effort you can also try to change your breathing patterns. Your brain may automatically exit sleep paralysis when it detects that your breathing rates are not as low as they should be during sleep. Another thing you could try doing is holding your breath, which should also wake up your body.

Sleep paralysis only paralyzes your voluntary muscles. Your lungs are semi-voluntary so that is why you can use breathing as something to regain control over your body.

I have personally never experienced sleep paralysis but it would be worth a try to relax and to let your conscious fall asleep. At which point you wouldnâ??t have anything to worry about, and you would be fully asleep. Either way it is generally recommend to not forcefully fight against the paralysis as it will only increase your panic and hallucinations.

Many people that hear about sleep paralysis want to try it regardless of the bad experiences most people have with it. I for one have always wanted to give this thing a try.

Luckily for you itâ??s relatively easy to induce sleep paralysis. All you have to do is lie on your back and relax. What you are trying to do is to trick your brain into thinking that it is in a REM state. Simply do not move and focus on your breathing. You want to become aware of all your muscles and relax them to the point where you donâ??t feel them anymore. Donâ??t even think about moving any muscles, as you want your brain to disconnect from your voluntary muscle system.

Sleep paralysis is actually very difficult to induce because most people get bored or fall asleep. If you want to induce sleep paralysis effectively you should be able to stay awake without moving for at least an hour. Getting up to check the time or thinking about the feeling in your limbs will only further the time it takes to enter sleep paralysis. It is tempting to try to move a limb after a couple of minutes, only to accidently move it and then give up on the whole thing.

The farthest I ever got was after about forty minutes, my entire skin started to tingle and I felt like I was vibrating. Every part of my body felt like when your leg falls asleep if youâ??ve been sitting on it for too long. It was very hard for me to move my limbs after that, but eventually I broke the entire effect by slowly lifting up my arm. It was really hard to do and it took a lot of effort, almost as if my arm weight 50 pounds. I wasn’t in sleep paralysis fully, but I can relate to theÂ difficultyÂ people have trying to regain control.

As for the hallucinations, I did hear some voices in my head. I’m not really sure if it was because of the sleep paralysis or just me. That type of stuff usually happens to me regardless (joke).

If you experience sleep paralysis, it may be something that will stick with you for the rest of your life. Try to embrace it. Seeing that many people try to induce your condition, you could consider it as lucky. You may want to induce an out of body experience or lucid dream while you are in sleep paralysis.

If your sleep paralysis doesnâ??t include hallucinations or negative feelings you could also try meditating and thinking; might as well pass the time productively rather than fighting against your own body.