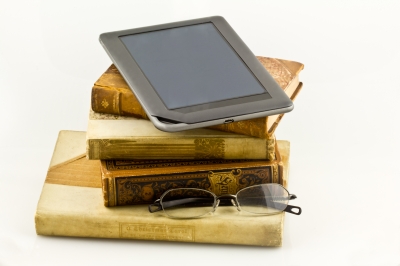 For a couple of years now, the e-book reader industry has been revolutionizing how many people read books.

This could be possible in large part due to a technology called electronic paper, which is often referred to as E Ink. Unlike traditional screens, the screen of all the popular e-book reader such as an Amazon Kindle, Sony Reader or Nook from Barnes & Noble can display text in a much more precise and book-like fashion. The screen looks as crisp as a physical book, and as a bonus advantage, this type of screen takes a lot less power, only requiring juice to change page.

First, it’s important to note that E Ink is a trademark owned by E Ink Corporation. It is behind many of the most popular first generations of e-book readers. As a general concept, electronic paper is the name used to refer to all the screens used by this type of devices meant to mimic real paper. The main difference between this type of screen and the common backlit displays used by cellphones or LCD screens is that electronic paper will reflect light just like normal paper does, instead of emitting light from behind the display. Modern types of electronic papers provide just as much contrast as a real paper, which is not typical of normal displays. Most types keep displaying the text on the screen without the need for power, so they can keep a display on for an unlimited amount of time, and there are even some displays that are thin enough to be bent like normal paper.

The first generations of electronic paper come from the 1970s when scientists used tiny polyethylene spheres to keep an electric charge. One side of these janus spheres are positive, the other are negative, providing black and white. The spheres are left suspended in a layer of silicon so that they can turn freely. By applying current, the spheres would then turn and either display white or black, as needed. Simply running the proper voltage over the whole screen would in essence refresh the page, turning all of the spheres the correct way to show black and white text or images.

The modern e-readers such as the Kindle use a technique known as electrophoretic. Titanium dioxide particles are dispersed in hydrocarbon oil along with a black dye and charging agents. This mixture is spread around two electrically charged layers, and when voltage is applied, the particles go either to the front or back, depending on their charges. When a particle is at the front, it appears white, when it’s at the back, the black dye is visible. This is how text and images are shown.

Right now, even the best electronic paper technologies can only show black and white or gray scale images. Also, these displays are always more difficult, since the whole screen has to be refreshed all at once. It used to be that it would take a noticeable amount of time to refresh the display, although newer technologies make that a lesser issue.