Like a lot of people, I find myself going through phases of watching a lot of documentaries and then not seeing a single one for months on end and reverting back to films.

It’s only when I decide to break this routine that I often find myself questioning why I haven’t been watching more documentaries.

Anyway, every now and again you’ll watch a documentary that really strikes a chord and resonates with you and most of the time these are documentaries with an ultimately sad story to tell but somehow becomes a most uplifting and inspiring experience.

One such documentary that falls into the uplifting category is Waste Land by British documentary maker Lucy Walker, who also bought us Countdown to Zero, Devil’s Playground to name but a few. Waste Land is about Brazillian contemporary artists Vik Muniz who spends 3 years at the largest rubbish (garbage) site in Brazil the Jardim Gramacho. Here he meets an interesting selection of pickers of recyclable material and begins working with them on an international art project: to make pieces of art out of rubbish that will sell at internationally. It’s an amazing documentary and offers exceptional insight into the lives of the some of the poorest and distregarded people. 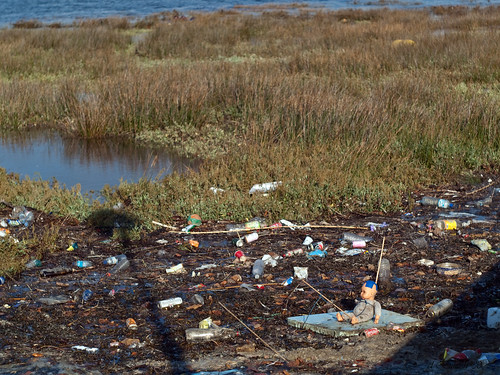 The central character, the leader of the pickers: TiÃ£o, is an exceptional human being who already achieved a lot before the film makers came to Jardim Gramacho, setting up ACAMJG, the Association of Recycling Pickers of Jardim Gramacho. You wouldn’t imagine someone working in such a place would be litterate let alone be able to cite Machiavelli and have read Nietzsche, but TiÃ£o like the other pickers featured in the film really shatter peoples’ pre-conceptions about refuse workers/recyclers. One of the main concerns that the documentary addresses is the eye opening nature of the project and how they’ve opened up the pickers to the art world, and the potential ramifications this could have on their lives. It’s pointed out that many won’t want to return to the recycling work and garbage dump after they’ve been taken out of this environment. But, as the Vic Muniz argues and you’re inclined to agree with him, this isn’t necessarily detrimental to their future lives and as reported at the end it has actually empowered many of them to improve their lives e.g. run their own small business and take charge of their lives.

After watching this uplifting documentary you certainly start thinking about your own habits and how much people have to fight for change and never give up hope, even when the odds are stacked against them. It also makes you think more about your household waste and how you can perhaps help those who end up dealing with it.