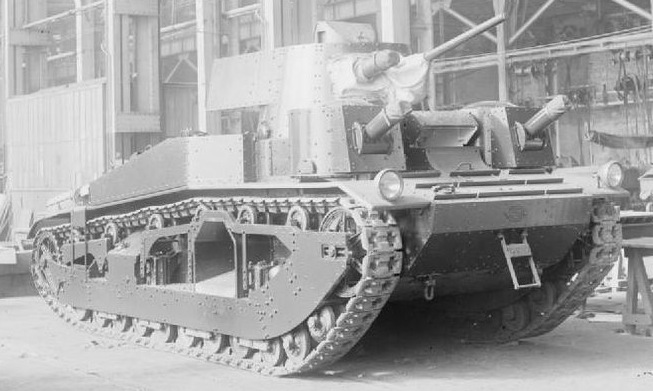 People say that war is the best thing that can happen for an economy.

It is true that during a war, technology advances quicker, and a lot of workers are needed to create war engines, as the government pumps money into the military. But these types of advances also occur between wars as well. Even though a lot of the most well known tanks and airplanes were created during the big wars, some impressive machines were made in a time of peace, as preparation for the next war. This was the case of the Vickers Medium Mark III, a tank made in Britain after the First World War.

Of course, not all new designs become something of great use. In this case, the tank was the result of a fairly flawed development process, and failure completely to attract any attention by the UK military, or any other country either. At the end of the process, only three prototypes were built, and the vehicle never went into mass production. Even though back in 1926 there was a lot of promise for the new vehicle, many issues came to plague it, and without good solutions, the project was scraped.

After the First World War, England needed a new tank to replace their Mark II vehicles. The Royal Tank Corps Centre is the office that takes care to draft new proposals, and they came up with requirements that called for a new light tank with a 15.5 tons weight limit. It had to be transportable by rail, and a gun able to pierce armor at 1,000 yards, while its armor could protect it from the same. They also wanted it to be as silent as possible, since the previous model was renowned for being very loud.

As the design process went through, the War Office added extra demands, like a separate engine room, superior steering and a 13 mm frontal armor. The first prototype was made later that year, a two-seater vehicle with a 47 mm gun. The designers had two options for the engine, a 120 hp engine with a top speed of 14 mph or a 180 hp engine with a 20 mph speed. This was called the A6 model and the finished tank was shown off in 1927 to the War Office. After consultation, a second prototype was ordered, and then a third one, increasing the max speed to 26 mph.

The Vickers Medium MK III tank is arguably one of the best looking tanks to ever be produced.

However, as tests started in 1928, several design flaws were found. When the guns were fired, they found out that the seating arrangement did not work, the suspension selected was inferior to the previous Mark II and if modifications were made to rectify the problems, the hull became completely unstable. The project itself was discontinued, although various parts of the Mark III were used in other designs, and by 1934, engineers managed to retrofit their prototypes into a command vehicle, which eventually came to be known as the Vickers Medium Mark III. In it, the main gun was replaced with a smaller, flat one, and the suspension improved. One of the vehicles was used by Brigadier Percy Hobart on the Salisbury Plain, while the others were unused in actual combat.