Many people say that the award for the worst game in history, from a respected video game company would definitely go to Atari’s infamous ET game. What makes it so bad? Read on to find out . . .

I recently watched an episode of a TV show called Code Monkeys. This show is a silly, raunchy comedy animated in the style of NES console era pixel graphics. This episode portrayed a fictional story of how a certain Atari video game became the worst video game in all history: E.T. The Extra Terrestrial for the Atari 2600 game console. If there is any episode of this ridiculous comedy worth watching, it would be this episode about the E.T. game! The episode is available on Netflix, and it has everything from hangovers, strip clubs, to Steven Spielberg and Neil Diamond! It plays out the story of why the E.T. game sucked so badly. It was because they did not watch the movie when they made it (they went to the strip club instead). Then they made a game based on the E.T. poster image! This E.T. Atari game actually made me cry when I was a kid! No one knew how to play this game, and I was determined to figure it out. Like so many other kids, I gave up trying to figure it out.

After watching this episode, I had to go online and play it again and see for myself how awesome this game is. I did a Google search for “Atari 2600 emulator online” and clicked on the first link. Then clicked the letter “E” for titles that begin with “E” and sure enough, there it was! It took me a second to figure out how to use the Emulator which was awesome because it’s the space bar and arrow keys for controls and that’s it! The Atari only had one button and joystick. You got to love simplicity! After playing for about thirty seconds I began to laugh hysterically at how awful this game is! It was so funny; I literally irritated my throat from coughing because I laughed so hard! It’s so ridiculous! 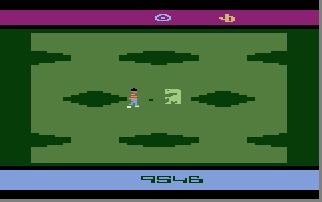 Spoiler Alert: Before you read any further, if you intend on playing this game go try it before I enlighten you on how to play it. It will be funnier if you have no clue how to play!

Even though the controls are simple, it doesnâ??t help trying to play this game. The spacebar makes E.T. stretch his neck out, and the movement keys move him around. With your neck extended, you can fly. Eventually, you will fall into a pit, but it seems to happen randomly. I guess this is a penalty box because you lose score sometimes like a countdown. Sometimes there are symbols at the top of the screen for some unknown use, but it seems to be totally random. I then decided to dig a little deeper to see if I could find out how to play this game, and there was a YouTube video with programmer that went through the code. He knew how the program worked, and IT ACTUALLY IS RANDOM! He said the whole point of the game was to find three puzzle pieces because in the movie he had to find stuff to phone-home to his alien parents. I guess the reason why he falls in the pit is because in the movie he nearly died in a creek bed. 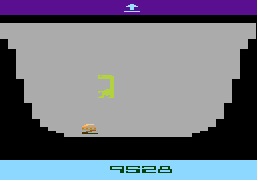 If you attempt to play this game let me enlighten you as to what I learned. If you get all the puzzle pieces to phone home, the space ship will come, but it wonâ??t land if there are humans around! So thatâ??s it, randomly fall in the pit, over and over, avoid a few people, and try to get all the pieces to phone home, and get in the space ship when it lands without humans around.

The Atari 2600 was capable of printing text on the screen just fine. If they would have coded one or two screens worth of instructions instead of rushing out the game it might have not been so hated. Atariâ??s image may not have been tarnished, and people may not have returned their copies. I know I probably wasn’t the only 7 year old kid that was crying after playing this game for two minutes. Maybe some of us should get our kids to play this game after watching the movie, and see if they cry too!

Click here to find out more about the history of Atari