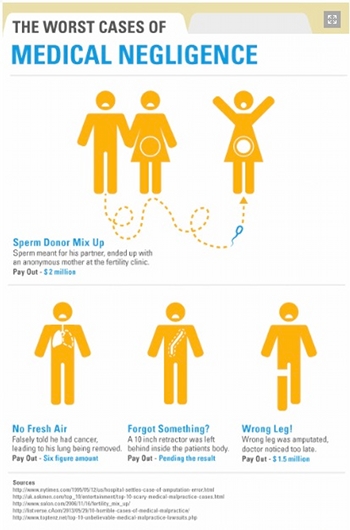 Putting your health – and occasionally, your life – in the hands of medical professionals for many of us is a daunting prospect.

Trusting a stranger with a stethoscope to diagnose and treat the things that ail you is in itself, a bit of a strange notion.

But who better than an expert with a degree to prove it? These days, doctors study for a decade to make sure they get it right. Unfortunately, education doesn’t trump human error, and once and a while something goes wrong and patients have to seek medical negligence claims for physical and emotional distress.

Read on for a few of the more interesting medical negligence cases in the last 30 yearsâ?¦

American couple Matthew Hayes and Nico swift went to a fertility clinic after being unable to conceive naturally. In a monumental mix-up, Hayes’ sperm was accidentally used by a hopeful mother who arranged for a sample from an anonymous donor. The woman got pregnant – but the law prevents the hospital from telling him the name of the woman or whether a child was born, and he has no paternal rights to ever see his child.

Over the summer in 2005, patient Laurence Bell complained to his GP of chest pains, and was subsequently diagnosed with lung cancer. He underwent surgery at Aberdeen Royal Infirmary to have his left lung removed, only to later be told he never had cancer at all. The unnecessary surgery left him weak and unable to carry out many of the same activities he could do before his misdiagnosis, forcing him into an early retirement.

Total payout: Settled out of court for six figures

You’ve got the wrong leg

It’s arguably one of the most well-known malpractice cases ever – a Tampa surgeon removed the wrong leg of a 51-year old patient during an amputation in 1995.

The surgical team actually realised the error during surgery – but by that time it was too late, the leg had to be removed. The man received more than a million dollars in compensation, and the incident sparked a new wave of precautionary measures to ensure nothing like this could happen again in future.

Stories about patients waking up and finding foreign objects inside them after an operation aren’t only urban legends – there are roughly 1,500 reports of this each year in the US alone. These occurrences can be painful and lead to further complications, but luckily are pretty uncommon.

What makes Daryoush Mazarei’s story special though is not the fact something was left behind in his chest – a 10 inch retractor – but that no one believed him when he said it was physically poking out. When he returned to the University of Pittsburg Medical Centre, they advised he seek psychiatric care. After a month of experiencing agonising pain, making several complaints and being told it was all in his head, a CT scan found the item and it was removed. No surprise he’s currently in the middle of legal proceedings against the hospital.

Click here to see the 5 highest paid doctors in the world.