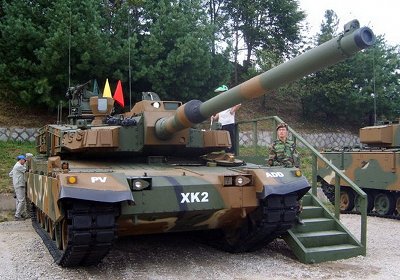 War machines always cost a lot of money, and when there is combat involved, governments are often willing to spend big bucks to develop new technologies that will give their armies the upper hand.

This leads to new and more expensive tanks, and recently the Guinness Book of Records awarded the most expensive tank in the world to the K2 Black Panther from South Korea.

This vehicle saw its beginning in 1995, when the Korean Agency for Defense Development decided to start working on a brand new tank design. This would be a modern armoured vehicle that had both offensive and defensive technologies which could rival anything available out on the battlefield. The development program was intended to modernize the Korean army, and despite the fact that the South Koreans already had the K1A1, a tank already superior to the North Korean T-55, the government wanted a tank that could be used both domestically and also exported to other parts of the world.

There were many prototypes created, including an unmanned turret version where the tank was controlled completely from the inside, but the final design has a manned turret. At first, the gun was supposed to be a 140mm smoothbore cannon, but Rheinmetall did not have the funds needed to finish developing the larger gun, so a 120mm was deemed adequate. In all, it took over 10 years to create the final design and produce the first tanks which came out in 2006, with a research budget of around US$230 million. Full production started in the Spring of 2007.

The K2 entered mass production and the South Korean army planned to start deploying the new vehicles to the field in 2012, although there were some delays due to engine problems. The vehicle has a Doosan Infracore Corporation diesel motor providing 1,500 horsepower, but several technical issues were found in late stage development. Because of these problems, the first K2 was produced using a German engine instead, so that this new tank could start entering service.

In total, 680 vehicles were planned to be constructed, but that number keeps going down and is at less than half of this projected number because of the delays because of cost issues and problems with the engines. A single vehicle costs US$8.5 million, which is the most expensive tank in the world, although several new projects are set to surpass it. This tank can accommodate a three man crew and features some of the most advanced and powerful weapon systems out there, with a 120mm gun able to create holes over 13 feet deep in the ground.

The K2 is not only very powerful, it also provides good maneuverability, as it can go over 70 km/h and climb 20 degree cliffs. It can go from 0 to 30 km/h in just 7 seconds, and can maintain a high rate of speed on off road terrain. The on-board systems are able to communicate with sophisticated base computers and provide the most modern targeting system to the crew. In many ways, the cost of this tank is warranted, but with all of the issues it has had so far, it has yet to really prove itself as a worthwhile project.

Click here to find out the latest advances in tank technology.