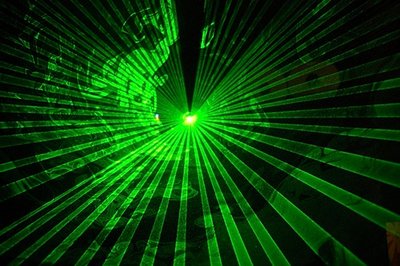 The word â??laserâ? is an acronym for â??Light Amplification by Stimulated Emission of Radiation.â? Albert Einstein predicted the possibility of laser technology in 1917, but the first laser was not created until over 40 years later. When the technology was first developed, it was billed as “a solution looking for a problem.â? Since that time, hundreds of uses for lasers have been found, in such diverse fields as medicine, printing, music, steel fabrication, art and space technology.

In 1954, the maser was invented by scientists, including several who went on to win the Nobel Prize. Maser stands for â??Microwave Amplification by Stimulated Emission of Radiation.â? The maser was a precursor to laser technology, and amplified microwaves instead of light waves. The first laser, using amplified light waves, was developed by Dr. T.H. Maiman in 1960. Maimanâ??s laser used a flash tube that illuminated a ruby cylinder. The name â??laserâ? was coined by Gordon Gould, a graduate student of one the inventors of the maser. Gould claimed to have developed the laser before Dr. Maiman, but did not file for a patent at the time of his claimed invention.

Diverse uses were quickly found for the new technology. The first medical use of a laser occurred in 1961, when doctors used a ruby laser to destroy a tumour. In 1965, only five years after it was first invented, a laser was put to use as a cutting tool on industrial diamonds. Since that time, lasers have also been used to cut such diverse materials as steel, titanium, paper, wood, fabric, glass and crystal. Lasers are also commonly used for engraving and drilling.

Throughout the 1960s, different types of lasers were developed, using a wide range of gases and other substances, and featuring differing methods of amplification. Lasers were first used as a visual art medium in the late 1960s, in laser light shows and light sculpture. In 1971, the first laser printer was invented, followed closely by the laser scanners that are found in most retail stores today. Fibre optic cables, which use laser technology, began to replace standard telephone lines in the late 1970s.

In 1982, the music industry was revolutionized by the introduction of the compact disk, which is played by striking the surface with a laser. DVD and Blu-Ray technology built upon the invention of the compact disk. Laser technology was utilized in the development of the modern computer, primarily in disk drives, disk burners, printers and scanners.

In the mid-1990s, lasers were first used to clean ancient statues and sculptures. This technology was modified from the process of laser engraving by using a weak laser that removes only the thin surface of grime and weathered material. Many ancient sculptures that were unable to be cleaned for fear of permanent damage were able to be restored and beautified. In 1997, Adele de Cruz, an associate professor of chemistry at Duke University pioneered the use of lasers to clean paintings. In a similar manner to cleaning sculptures, centuries of grime can be removed from paintings. Lasers can also read the materials present in the original paint, giving researchers a non-destructive means of analysing the substances from which the paint was made.

Lasers are used in many common products and industrial processes. Most people cannot go through their day without encountering numerous lasers, or using products created or improved by lasers. Although many great laser-based inventions have already been made, additional practical and beneficial uses of lasers are sure to be found in the future.

This article was supplied by Josh Hervall, a technology and history enthusiast and keen blogger. He writes for www.Fimark.co.uk, specialists in Laser Marking and Laser Engraving in the UK.