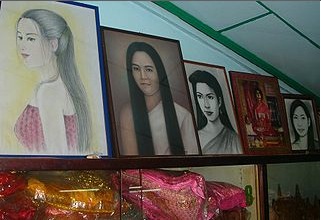 Mae Nak Phra Khanong portraits left at the ghost’s shrine as a mark of respect.

Mae Nak is the short name of the Mae Nak Phra Khanong figure, a ghost present in Thai culture dating back several centuries.

The story started in the time of King Mongkut which ruled in the 1800s in Thailand. He was known as a progressive king which brought new technologies and cultures into the Thai tradition, and was a respected noble figure. Mae Nak is based on a tradition which occurred during this reign, where a beautiful young woman which was called Mak lived in Bangkok, near the Phra Khanong river. She was in love with her husband, Mak, and those are the words that make up the figure we now refer to when speaking of this ghost.

When Nak was pregnant, Mak was part of the Thai military and went to war against the Shan Tribe, an enemy of King Mongkut at the time. While on the battlefield, Mak was seriously wounded and sent back to Bangkok where he was nursed back to health. Meanwhile, Nak gave birth but the child and Nak died during the process. However, when Mak recovers and goes back home, he finds both Nak and the kid alive. Neighbours try to warn that these are ghosts, however they are mysteriously killed.

Mak resumes his life with Nak and the baby when one day, when Nak is preparing a popular recipe called nam phrik, she drops something off the porch and reaches down through the floor to pick it back up. This is when Mak realizes that he is living with a ghost and tries to flee the home. He walks away during the night, but Nak discovers her husband has fled, and purses him. Mak tries to hide behind the leaves of a Blumea tree, which ghosts are supposed to be afraid of, according to tradition. He then goes to a Wat Mahabut temple, staying on holy ground in order to escape the ghost.

Nak instead terrorizes the people of Phra Khanong, furious at them for making Mak abandon her. But the ghost is captured by a local exorcist and he manages to confine her in a jar, before throwing the jar into the river. Fishermen later discover the jar and free Nak by opening it. But a monk nearby sees the ghost and confines it again to the bone of her forehead, binding Nak to a waistband. When she died, the waistband was left in the possession of the royal family, where it is supposed to still be.

The story was modified during the ages, and some alternate versions were created. In one, the monk told Nak that she would be reunited with her husband in a future life if she left the world of the livings. In another, the ghost story was actually invented to prevent Mak from remarrying. Regardless of the true events, a shrine was made to Mae Nak near Klong Phra Khanong and can be visited. Some people leave offerings to the ghost, including fruits and flowers.