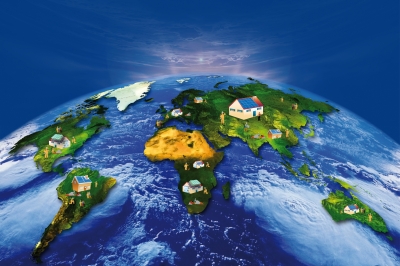 Solar power has already been connected with the use of mobile phones with the development of solar chargers, although these have yet to catch on in a big way.

However, the news that Apple has been given a patent for a touchscreen panel that is solar-powered might cause a bit more excitement.Â Â This is something that is in development at the moment so may take a while to reach the consumer but it is fair to expect that it will feature on a number of Apple devices including the iPhone and on other future phones, too.

The patent states that the company has been working on a solar powered screen which has touchscreen features so that it can be charged just by being left in sunlight.Â Â The aim is to help to conserve the surface area of the device as well as provide the user with a greener way of charging their phone during the day.

This is a move that is sure to find favour with those who are interested in green issues and will also delight those that were worried about Apple losing its innovative touch.Â Â The screen is also to be designed to respond to a variety of touches, so you can use a stylus and other objects instead of touching the screen all the time with your fingertips, which can leave it marked very quickly.

There have been rumours for a while that the company is planning to launch a smartphone with a 5 inch screen with the aim of taking on the Samsung Galaxy Note.Â Â This has been a big success which has threatened that of the iPhone range.Â Â The whole Samsung range has been very popular in recent years and there are many users who will now choose one of their handsets over an iPhone.

At the present moment in time nobody is sure how far along in the development stages this is and we should take into account that there are many patents granted for products which do not go into mass production.Â Â However, this would be a real vote-winner with the public.Â Â Each iPhone has proved to be popular and in order to remain so it is a good idea to ensure that each one can offer something a little different.

Solar power has many benefits to the user, particularly for a device such as the iPhone.Â Â As a smartphone packed with apps it should be noted that the battery life on the handset will drain fairly quickly, particularly if you are a heavy user.

Solar power can help to prevent the battery life draining too much during the day, giving you more (or unlimited) time to use the features on the handset.Â Â And of course, if Apple does introduce this technology, it can only be a matter of time before the other manufacturers follow.

Samsung has been predicted to take the lionâ??s share of the mobile phone market in 2013 but with technology like this snapping at its heels it will also need to become a little more innovative.

Phil Turner thinks that all future phones will include solar power; it just seems the logical next step, especially with current short battery lives.