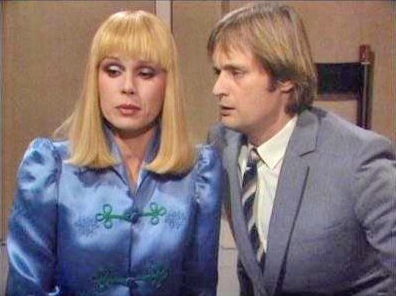 The Sapphire & Steel episodes, which ran from Â 1972 -1982 always fascinated me when I was younger and sometimes scared the living daylights out of me, as the TV show was creepy and gave me a feeling of unease, every time I sat down and watched it. In this blog post I am going to look back at this famous series and find out more about how this TV series attained its creepy edge that fascinated me in my youth.

Sapphire & Steel is a complex science fiction series where they are both inter-dimentional operatives that take care of events, creatures, ghosts and other weird stuff that slip though the fabric of time. Although, throughout the series there isn’t much information about where they come from or what exactly the goal of their mission is. It is pretty evident however that they are guardians of time and that they police rips and tears in the fabric which interfere with the normal continuity of time. Each of them appear to be elements chosen from amongst a host of other elements who are specifically tasked with completing missions in the dimension that Earth is in. The intro states that no heavy elements can be chosen where there is life. Other characters in the form of elements sometimes pop up in the series from time to time, such as Lead and Silver. Below is the introduction to Sapphire and Steel.

Not To Be Trusted

Throughout the series, something antiquated often sets off an event, such as an old photograph, object or even an old nursery rhyme. What is unnerving is that Sapphire and Steel just show up uninvited, suddenly and without warning to ‘help’ people. They say they are their to help, but you can never quite trust them. Sapphire has a bit more emotion and often tries to see a human being’s point of view, but Steel on the other hand has little time for the people caught up in the event. He insists on solving the breach in time, whatever the consequences for the people caught up in the mystery. In fact, even though Sapphire is a little bit warmer when it comes to emotions, you can’t quite trust her either, as in the end she puts her mission first. Sapphire sometimes appears caring but is at the same time oddly detached and seems ready to abandon the person who seeks her help.

Sapphire can manipulate time, including the ability to rewind time to a specific moment and has the ability to touch objects and determine the date at which they existed from. She often psychically gains information about people’s personalities or their backgrounds and desires, just by being close to them. Both Sapphire and Steel have the ability to telepathically communicate with each other.

Steel’s abilities are shown less so in the series, but he possesses immense strength, can freeze himself to eliminate entities and can even paralyse someone with a single stare. Most of the time though, he leaves the tinkering around with special abilities to Sapphire, as he coldly gets down to the nitty-gritty of solving a time problem. I like the way that Steel is fully focused on each task, shutting out all distractions.

One thing that was interesting is that the series had a very small production budget, which meant that special effects could not often be used. I think that this fact has helped the Sapphire & Steel series not to date so fast and contributed to the eerie feeling the TV show has upon its viewers.

Below is a video of Assignment 2:


The Sapphire and Steel series is also available on DVD with all of the series included in a boxed set. I suppose the reason why I like this series so much is that there are a lot of unanswered questions that get your imagination running away with itself. I’m personally really enjoying re-watching this show [shareaholic app="share_buttons" id="4703992"][shareaholic app="recommendations" id="4704000"]