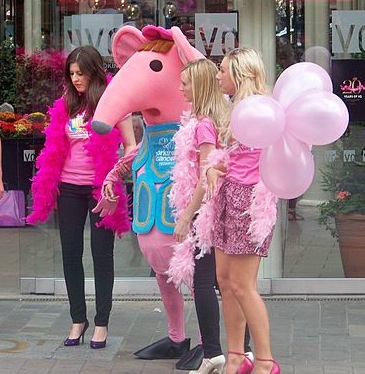 I grew up in what was probably a golden age for childrenâ??s television and I couldnâ??t get enough of Mr Benn and Bleep and Booster. One programme that I never really took to, however, even as a child, was the Clangers. I actually used to turn this one off but it is considered a classic, indeed so much so that it is being resurrected. I wonder if I will discover a new appreciation for the show the second time around?

The original show was first broadcast in 1969, appropriately just a short time after the first moon landing which was certainly something I watched with great interest even though I was only 6 years old. In that respect the series was very much of its time as there was a general fascination with all things space and this show told the story of a race of aliens on a nearby planet. The Clangers themselves were, oddly, pink knitted rodent like creatures who lived in craters covered by dustbin lids. The lidsâ?? clang gave the programme its name. The other characters in the show included the Soup Dragon and the Iron Chicken!

The Clangers communicated by using a strange whooping sound and I am interested to learn that the scripts were written out in full and in English rather than whooping. Joint creator Oliver Postgate has revealed that the written dialogue included a lot of swear words! Apparently the whooping Clangers swear like troopers and that could make me see the show in a whole new light!

The new series will feature modern animation techniques and scripts written by Postgateâ??s son Daniel. Perhaps the modern incarnation will appeal to me more than the original which seemed ridiculous even to a six year old. I know millions of children loved those little pink creatures but they just got on my nerves! I obviously have an issue with Peter Firmin, the showâ??s co-creator as he was also behind Ivor the Engine and Bagpuss and I didnâ??t like those either!

Despite my own misgivings the Clangers has been hailed as a classic and the iconic programmeâ??s return will be much celebrated. I just donâ??t know how it will come across in the technological age. When you consider the science fiction imagery kids are exposed to today, including animations, the Clangers is going to seem a bit crude.

I guess that with knitted figures the show is at least very much of the current era too. After a period in the doldrums when only grannies knitted, the craft has seen a major resurgence in recent years and is very popular amongst the young. There are even many celebrities who publicly knit. Perhaps when the Clangers re-emerge in 2015 everyone will be dropping their Aran knits and funky scarfs in favour of crafting pink space age rodents! I doubt if I will be joining them but I do think this is a show which could gain cult status around the world, if not in my household.

Sally Stacey is a keen writer and business owner who divides her time between writing and running her bridal shop.