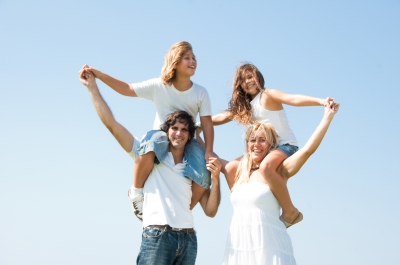 Itâ??s a commonly-known fact that kids love video games, but not all video games are child-friendly. From the crazy skull-bashing involved in Mortal Kombat to the throat-slashing of Black Ops, games arenâ??t always the most PG of media.

However, for every Black Ops-esque game, there are some fantastic games that every child is bound to love. For games that are fun and family-friendly, you canâ??t go past these ten.

Mario
No other character is as representative of video games as Mario is. Recent studies have even suggested that Mario is more recognisable to children today than Mickey Mouse.

Whether heâ??s jumping and running through 2D or 3D worlds, going kart racing, or playing various sports, Mario games have a universal appeal, and are entertaining â?? and appropriate â?? for all ages. You can find his games on any Nintendo machine, including the Wii, Wii U, DS or 3DS.

The Pokemon franchise has been running solidly since the mid-1990s, and the basic game remains largely unchanged. Players encounter and catch wild animals, called Pokemon, train them as pets, and pit them in battles against other peopleâ??s Pokemon. If that sounds a little worrying, donâ??t worry: the Pokemon themselves enjoy the battles, and are never hurt.

Marioâ??s long-time rival, Sonic the Hedgehog has been a video game staple for more than twenty years. Kids today still love his exciting high-speed antics, and what better way to enjoy this fast-paced action than with a racing game?

In All-Stars Racing: Transformed, Sonic gathers his fellow Sega characters and challenges them to race around tracks inspired by various games, using cartoony weapons to slow their opponents. Fan favourite characters like Dr Eggman, Tails, AiAi and Amigo are all playable, and even Wreck-It Ralph, from Disneyâ??s new hit movie of the same name, makes an appearance.

Games for Nintendoâ??s new games console, the Wii U, are played with a new controller that a touchscreen mounted into it. Nintendo Land is the best game to learn how that new input can make games better, and itâ??s a lot of fun as well.

The game is made up of twelve mini-games based on Nintendoâ??s rich catalogue of characters and worlds, and each one requires players to do different things with the controller.

There are games for one player, games where four players team up to beat one player with an advantage, and games where up to five players work together. Whatever you choose to do, thereâ??s always a lot of fun to be had with five friends in one room.

Family-friendly games donâ??t always have to be made specifically for kids. The FIFA series will please soccer fans of any age, and the latest version, FIFA 13, is arguably the best.

Players can jump into an individual match against another player or a computer-controlled team. Career mode lets players manage official clubs and international teams over the course of the 2013 season, or for the first time, pull together their favourite soccer stars from all over the world, and create a dream team to lead through the season.

Perhaps one for kids a little older, this game is based on the wildly popular Cartoon Network show of the same name. Itâ??s called an action-fighting game, so it might not be appropriate for particularly young or sensitive children, but pre-teens and fans of the show will love it.

Players control Ben through two different time periods â?? at 11 years old and 16 years old â?? as he tries to stop the evil Malware from a plan to mess up the present by tampering with the past. And of course, it wouldnâ??t be complete without the ability to turn into Ben 10â??s signature aliens: Ben can take on thirteen different forms through the course of the game.

Unlimited isnâ??t an exaggeration: the Scribblenauts games allow players to get creative to solve puzzles. Simply think of almost any object, animal, vehicle, plant, or person, type it in, and it will appear.

Unsure of how to get across that gap? Type â??bridgeâ?, and one will appear. Or if thatâ??s too boring, how about riding a pterodactyl over?

The game imposes a few restrictions: no copyrighted material will appear, and no rude words will work. But the scope is still huge, and kids will love to stretch their imagination to come up with creative solutions to problems.

Whatâ??s a â??Rabbidâ?, you ask? Well, itâ??s kind of a rabbit, but itâ??s extremely crazy, noisy, and annoying. And kids love them. They have a cartoony, slapstick, Looney Tunes-esque appeal, where they are always getting into mischief. They like to invade various places, like malls, TV stations, amusement parks and oh yeah, Earth. Each time, they bring with them a set of crazy mini-games that are pure, fast-paced fun.

Prefer something a little quieter? Animal Crossing games are essentially virtual doll houses, which both girls and boys can enjoy. Players visit a town and interact with its inhabitants, who will give them jobs to do and adventures to go on. Time in the game passes in real-time, so even when you arenâ??t playing, the townsfolk continue to live their lives.

Drop in at 8am in your time, and the townspeople will be waking up, going about their morning routines. Play again twelve hours later, and theyâ??ll be getting ready for bed. It encourages players to visit the game at different times of day: some characters are nocturnal, or will only appear for a set amount of time per day. Itâ??s a great kind of reward and discovery that keeps kids coming back to see what surprises they can find at different hours.

One of the most popular games of recent times, Angry Birds is a simple concept with a â??just one more turnâ? kind of appeal. People of all ages enjoy flinging birds at green pigs hiding in flimsy structures, and replaying levels to find the most efficient methods of destruction.

There are so many versions of the game out now as well. Seasons dresses up the traditional gameplay with yearly themes like Valentineâ??s Day, Halloween or Christmas. Thereâ??s a crossover, featuring characters from the Dreamworks film, Rio. Theyâ??ve even ventured into space, and dressed up as Star Wars characters.

While it found its initial success as a mobile game, it quickly spread to platforms like Facebook, Google, Android and most mainstream video game consoles and handhelds.

Michael Irvingis a freelance writer, who has been investigating which titles are best for introducing younger relatives to video games. He has been Flexi-renting various devices to explore family-friendly games on them.