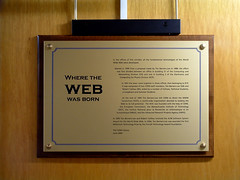 Who can still remember the web page ever created?

Most likely none of the teenager who use the web today have even wondered what the original page looked like, never mind where it went. Not so for Dave Noyes, who is in charge of the CERN website today and issued an appeal to the world to find that elusive first page.

Back in the Day, Before Internet

1990: During the early days of the internet Berners-Lee wrote the first page Â Â  as a way for scientists at CERN (European Laboratory for Particle Physics) to share information with each other. He only saved a copy of the page in 1992 â?? on a floppy disk. That copy has been serving as the earliest official record of the birth of the World Wide Web. Incidentally Berners-Lee is also the creator of internet language HTML, HTTP and URL. For those who donâ??t know, or donâ??t remember, CERN released the web to the world in 1993.

Since then the web has grown exponentially from 500 websites at the end of â??93 to around 630 million today. These days things like hosted email, Skype, Wikipedia and Tumblr are just few of the offerings the internet made possible, things that most of the developed world takes for granted

An Appeal Is Made, An Answered

Noyes issued an appeal for anyone who might have a copy of that first page, on NPRâ??s All Things Considered radio show. Once found it would form part of a project thatâ??s taking place in the name of history: “I want my children to be able to understand the significance of this point in time: The web is already so ubiquitous â?? so, well, normal â?? that one risks failing to see how fundamentally it has changedâ?, Noyes told BBC News, “We are in a unique moment where we can still switch on the first web server and experience it. We want to document and preserve that.”

In more ways than one it is fitting that the message indicating that someone had a copy of the page came via Twitter; another symbol of how far technology has come since 1990. Â Professor Paul Jones, from the University of North Carolina, tweeted a link to his copy of the page soon after the show.

Whilst itâ??s still not the 1990 copy, it is a version dating from the following year, and CNet reports that it was put together by CERNs WWW team as a demonstration for the Hypertext ’91 conference in San Antonio, Texas.

To later users of the World Wide Web, the page wonâ??t look like much; itâ??s just a white background with text and a number of hyperlinks. But is an important artifact that The First Website, the CERN project to commemorate the internet, is keen on preserving.

Professor Jones still has his old NeXT computer which likely contains a number of other cool relics; the only problem is he canâ??t remember the password. Perhaps someone will hear of his predicament and provide a solution to it too?

Pippa Green is a London-based blogger with a keen interest in technology and is currently investigating the use of hosted desktops in the UK.