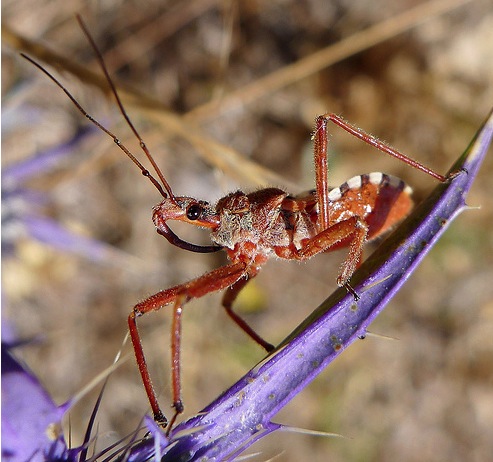 Assassin bugs are a nasty predator, using their venom to immobilize then devour their victims.

Over 700 species of Assassin bugs are known of, with a new species discovered in the caves of Arizona only recently. Nicknamed the “Labyrinth bug,” this new species is just as disturbing as the rest of its family, although much is yet to be discovered.

The Labyrinth bug has a small head, long limbs, and an extended midsection, much like its brother assassin bugs. Like its relatives, the Labyrinth bug has a unique way of killing its prey â?? immobilizing them with its long, thorny legs and injecting its victims with poisonous saliva from its sharp, needlelike mouth, which liquefies the internal organs, thus making it easy to for the assassin to suck out the victims’ insides. After an assassin bug has fed, it will sometimes wear its victim’s exoskeleton as a form of camouflage while it hunts down its next meal.

Far Away From Home

Assassin bugs are not unique to Arizona; in fact, they live all over the world, and are spread throughout the U.S. It’s difficult to pin down the conditions the assassin bugs find suitable for life, as there are over 700 species. Most people have never seen an assassin bug, although those who have encountered these insects usually have not experienced any type of interaction with them. However, it’s important to note that the Labyrinth bug lives far away from its closest relatives â?? most reside in the New World tropics.

All types of assassin bugs, including the newly (re)discovered Labyrinth bug, are part of the Reduviidae cluster, which also includes Ambush bugs and Thread-Legged bugs.

The Labyrinth bug dwells in the deep, dark corners of the massive cave systems of Kartchner Caverns State Park in Cochise County, Arizona. Aspects of the bug’s body make it well-suited for ensnaring and ambushing spiders, particularly the long, brush-like set of hairs on its front legs. It is hypothesized that the Labyrinth bug uses the hairs on its legs to manipulate spider silk. One adult Labyrinth bug was observed playing with the remains of an old spider web, wrapping the strands around its legs and creating tension which could either be used to ensnare spiders, or to signal the arrival of a new meal. More field studies will have to be performed in order to prove these theories true or false.

Protecting Yourself From Predatory Bugs

Since the Labyrinth bug lives so far underground, you won’t have to worry about ever encountering it. However, if you have predatory bugs in or around your home, call a pest control professional and start a plan to keep your living quarters safe. Predatory bugs are no picnic to deal with, but with the help of a pest control professional, your home will be in good hands.

Stacy is a freelance writer from California. She writes for the Los Angeles pest control blog.