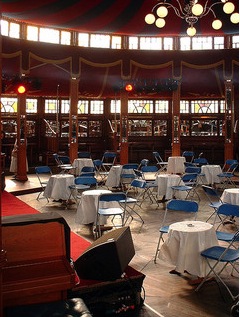 Tents go far back with mankind.

I can even think of a few references from Biblical times.Â  Several Old Testament prophets resided with their families in tents.Â  Saint Paul himself was a tent maker.Â  We may have come a long way since then when you think about transportation, technology, or medicine, but tents continue to be a valued form of shelter.

Historically, the U.S. Department of Defense has had many uses for tents.Â  At most sites you can see a tent for sleeping, a tent for dining, and even a tent for recreation (just to name a few).Â  Iâ??m sure they favor tents because they are a portable source of shelter, quick to set-up and take down, which is essential when your unit needs to be mobile.

Have you ever heard of a Spiegeltent?Â  If not, Iâ??m confident youâ??ll find them just as charming as the rest of us do.Â  Originating in Belgium during the 19th century, Spiegeltents are essentially mobile dance halls.Â  Back in the day they would move throughout the countryside to areas without a dance hall to be used in conjunction with county fairs.Â  They often featured glass and mirror dÃ©cor.

Believe it or not, there are still a few around today.Â  They are mostly used for art festivals around the world, but you can find a few fixed Spiegeltents in the United States.

The popular event Oktoberfest has also traditionally utilized tents.Â  Beer tents are temporary structures, only used during the festival, and range in size and function.Â  Tents feature different brews and atmospheres; some are friendly family, some display artwork, and some are themed around something specific, such as oxen.

Tell me: who doesnâ??t think about the red and yellow â??big topâ? when the topic of historical tents comes up?Â  Anyone who has seen Water for Elephants surely does.Â  Portable tents were perfectly suited to traveling circuses because they moved from town to town constantly.Â  In fact, when Americans started looking and moving westward, circuses packed up their tents and went with them via the railroad.

J. Purdy Brown is credited with using the first circus tent, which was made of canvas, in 1825.Â  Up to that point the most common structure circuses used was made of wood and had to be torn down and transported every time they relocated.Â  It doesnâ??t take a genius to realize that those crews were thrilled with the advent of the circus tent.Â  But more than being simple to assemble, these tents were also inexpensive and easy to transport.

Initially circus tents were held up by a single pole in the center.Â  As time went on more poles were implemented to accommodate higher bleachers.Â  And while early circus tents were small, housing just one ring and seating a couple of hundred, they came to seat thousands and cover several rings.Â  Large circuses would even have multiple tents to provide their customers with a handful of entertainment options.

And who can forget the tent the Weasleyâ??s borrowed from Perkins in Harry Potter?Â  A bit like Mary Poppinâ??s handbag, its interior is much bigger than it looks from the outside.Â  In fact, it even has bathrooms and bunks much like a small home.Â  The Weasley family used it during the memorable Quidditch World Cup.Â  Later, Hermoine sets it up for herself, Harry, and Ron with a simple â??Erectoâ? spell when theyâ??re hunting for He-Who-Must-Not-Be-Namedâ??s horcruxes.

Jessica has a bit of personal experience with this topic since her family creates their own history in recreational tents when camping.Â  She has also seen history created for a few close friends in the tents from companies providing wedding rentals; Utah locals often utilize tents for weddings and receptions during pleasant seasons.Â  But while sheâ??s not roughing it outdoors or celebrating a friendâ??s nuptials, Jessica spends much of her time constructing riveting articles such as the one youâ??ve just finished reading!Â  Follow her on Google + to read on.