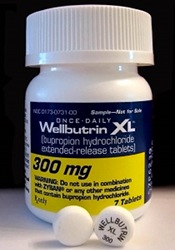 This is a no-nonsense first hand review of the drug ‘Bupropion’, used to help people quit smoking.

What follows are just my personal experiences when using the drug to quit smoking. This drug has side effects, so you should consult with your doctor, and think carefully before using this last line of defence to try and quit smoking.

I recently put up a personal blog post about my experience of weight gain after quitting smoking which you can read here. I used the drug Bupropion after 7 previous attempts where I failed to give up smoking. I’ll admit it, I just couldn’t stop. People who don’t smoke might find this very odd, after all you just need willpower right? The trouble with willpower is that it fluctuates from day to day and even from hour to hour. Even if you could keep a high level of positive willpower up for an extended period of time Nicotine is a lot stronger. Some people manage to quit cold turkey and beat the odds, and my hat goes off to those people. I however dived headlong into lethargy and negativity when I tried to stop.

So, after admitting to myself that I couldn’t stop, I asked various doctors for advice, but unfortunately I got warnings about how bad it is for me and that I need to stop. Warnings that I was giving myself already anyhow. The patch or nicotine gum was often mentioned in doctor’s visits, but I’d already tried these and they did nothing for me, as they contained the nicotine that I was craving. I wanted to be free not just from cigarettes but from nicotine addiction also, otherwise I would never be truly free.

Then, I decided to do a lot of research on Youtube and on the Internet for accounts from people who had used medication to stop. I found the drug Bupropion looking particularly promising so I watched and read every bupropion review I could. I knew that the drug had side effects and that a 300 mg dose per day meant a 0.1 percent chance of a seizure as a side effect. All in all I figured that this risk was a lot less risky than smoking all my life. So, after comparing different drugs I went out and bought bupropion, the brand name was Quomem – a month’s supply.

I read that it takes at least 1 week to get into your system, so in the instructions it was recommended that I keep on smoking whilst starting the course, then plan a date, no more than 3 weeks in advance, of when to stop. I planned to stop 2 weeks into the course.

After about 4 days I could really feel the drug taking effect. Dopamine levels began to remain high and I found out that nobody really knows for sure how the drug really helps people stop smoking. It’s a bit of a mystery.

I found that I was on a kind of natural high, even after a full day’s work I felt like I had just gotten out of bed and felt fresh and unstressed. I remember sitting in a Sizzler restaurant and hearing some guitar music, where I then began to drift off as each note sounded so nice. In a nutshell, I felt mildly high and extremely happy.

If you have ever smoked or drank alcohol in the evening, you’ll know what I mean by having a drink or a cigarette to get rid of that itch, that edge that you feel after returning home from work or after a stressful day. Bupropion took that edge off 24/7 and cigarettes began to have no effect on me. I was already feeling that high that cigarettes give you and didn’t need to smoke one. The cigarettes became useless in a way, as the urge had gone down to smoke by about 70% for me personally.

So, I moved my deadline for quitting smoking back to just 1 week and easily quit. People that I knew, who lit up near me were baffled that I was experiencing no urge to smoke. I began to almost worship this drug and started calling it a miracle. I didn’t feel depressed or the usual feeling of ants crawling over my body after giving up a vice. Everything was going silky smooth.

Then the side effects started to come. I had restless leg syndrome, where I felt that I had to move my legs around at night which disturbed my sleep, so I had to take a sleep inducing antihistamine in order to fall asleep at night. I would sometimes get up and go to the toilet numerous times. One time I counted myself going to the toilet 6 times in 1 hour. People may have assumed that I had bladder problems. Those were the side effects I experienced up until the fourth week.

The course was meant to run up to 6 or 7 weeks and no longer, but I had to stop after the fifth week. The reason being is that the drug’s effect started to reverse, as in I felt down and depressed rather than on an up. I also had dizzy spells where twice I had to sit down as I felt as if I was about to collapse. Even people around me started to notice the downward curve in my mood.

So, I stopped taking it after 5 weeks and it took around 2 weeks after this to get the drug and the side effects out of my system.

In this bupropion review you’ll notice that I prescribed this drug for myself, which I obviously wouldn’t recommend, always consult with a doctor if you are thinking of using medication to stop smoking. However, even with the side effects, bupropion helped me kick the smoking habit for what is now 5 months. I don’t regret taking the drug at all as it has maybe saved my life.

Bupropion, if you are advised by your doctor to take it, will not stop you smoking by itself obviously, but it put the urge to smoke down by around 70% for me personally and I found the other 30% of determination that is needed quite easy to muster under the circumstances.