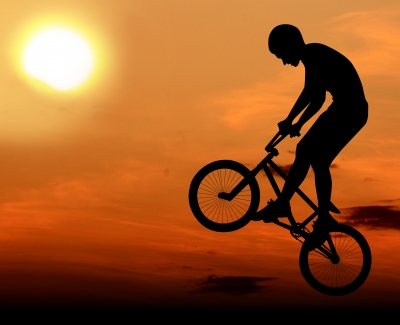 BMX Boy is another simple BMX-style game that allows players to perform a variety of tricks while in the air, propelled by varying sized ramps placed throughout the game.

The objective of the game is to complete as many tricks as possible before the 2-minute clock runs out, while also trying to avoid crashes that cost 1,000 points each time.

In BMX Boy, you can use all four arrow keys to direct your motion, the spacebar to jump, and the numbers 1-9 to perform various tricks. The up arrow makes your character change direction, but you have to jump or launch yourself off a ramp first, while the down arrow rotates the bike beneath your character for a decent trick. The left and right arrow keys simply move forward in either the left or right direction, depending on which way your bike is facing.

The difficulty of BMX Boy is somewhere between easy and moderate, with tricks being easy to pull off after launching off of the gameâ??s large ramps while crashes are so common that it makes the game itself almost annoying to play. With each crash deducting 1,000 points from your total combined with the fact that you can literally crash just by standing still, it can be difficult to get a decent score before the timer runs out.

While this game features more tricks and larger ramps than similar BMX games, it still lacks the fundamental excitement necessary to stay entertained for very long. For starters, crashing is as simple as pressing the wrong button while remaining still, which quickly leaves the player with several thousand points in the negative unless they are balanced out with enough cool tricks. Unlike similar games, BMX Boy does feature several large ramps that give the user plenty of time to perform single tricks as well as combos. However, this game only gives players 2 minutes to play and consists of just one scene.

Although players lose points by crashing, the crashes are very uneventful with no blood or gore of any kind. While this factor makes BMX Boy a parental-approved game, it makes it very dull for anyone looking for something fun to do with their spare time. Still better than some BMX-style games, BMX Boy has a long way to go before it makes it on the list of top fun BMX games.

Steve is a Technology Blogger who loves to write on Latest in Gaming Technology.In his Free Time he loves to play free BMX Games online.