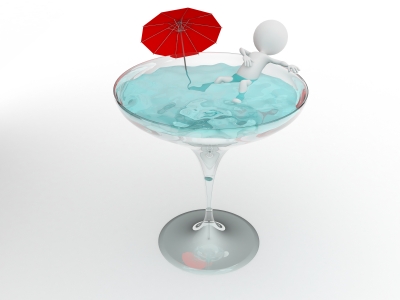 One amazing fact about water that may surprise you is that it does not conduct electricity.

The reason why water does not conduct electricity is that seldom is water completely pure, so will conduct electricity because of the impurities contained in normal water. When salts dissolve into water, ions are formed with different electrically charged atoms, positive Na ions and negative CI ions.

Water makes up a lot of the percentage of organic life-form mass, such as a tree which contains seventy-five percent of water. About two thirds of a human being is water and even the bones of human beings contain 25% water. The maximum length of time you can survive without water is about 5-7 days.

You will start to feel thirsty when you have lost over one percent of your body’s total amount of water.

Less that one percent of water on Earth is suitable for drinking as most of the water on the Earth’s surface is either salt water or is frozen solid.

There are about 13 million households around the world that drink from wells and they as such are responsible for keeping the water treated and clean. Around 800,000 wells are drilled each year in the U.S.A for commercial and domestic uses, as well as for water testing.

There are over two billion people on Earth who do not have a safe water supply.

Most people think that showering saves water, but in actual fact having a bath typically uses less water than taking a shower would use.

A big scam with bottled water sellers is to sell bottled water that is actually tap water. Around 25% of bottled water is in fact ordinary tap water. The National Defense Counsel undertook a four year test of over 100 bottles of marketed water and found that one third had chemical levels exceeding industry standards or contained bacteria.

Each person gets through around one hundred gallons of water per day when they are at home.

When it comes to contaminants dumped in water sources, it only takes one gallon of gasoline to contaminate around senenty five thousand gallons of water.

A really weird fact about water is that hot water freezes quicker than cold water. If you throw boiling water up into the air in subzero temperatures, what you will get as a result will be instant snow.