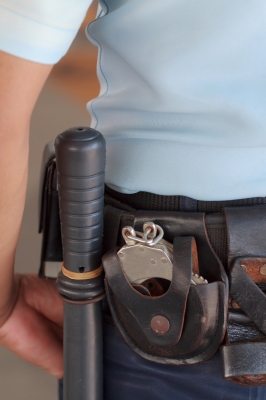 There is a beautiful picture of the American flag waving against a cloudless blue sky circulating on Facebook. In the space below Old Glory the caption reads something like this: How is it that the colors red, white, and blue stand for freedom unless they are flashing in your carâ??s rear view mirror?

If youâ??ve ever been pulled over by the police, then you can probably sympathize with whoever captioned the picture. I know I can! One dark night last winter, I was driving along going just under the speed limit, minding my own business when red and blue lights began flashing behind me.

My mind raced with things that I might have done wrong. Did I accidentally run a yellow light? Fail to yield at a stop sign? Was I, weaving forbid, driving too slowly? The reason the officer pulled me over was to warn me that one of my headlights had burned out. I was relieved, but I have to admit that being pulled over rattled my nerves a bit.

When you are pulled over, there are easy ways to minimize the problems. It is natural that you may feel nervous, but you are certainly not alone. Regarding residents of the United States aged 16 and older who were pulled over by police from 2002 until 2008 the percentage dropped nearly 5%.

However that still left nearly 17% of all drivers who were pulled over by police (www.bjs.ojp.usdoj.gov). Thatâ??s still nearly 5.5 million licensed drivers (www.en.wikipedia.org)! Regardless of whether or not a police officer has ever had you pull over to the side of the road, here are some Doâ??s and Donâ??ts to remember should you ever see their lights flashing in your carâ??s rear view mirror.

DO Yield to the Right â?? Slamming on your brakes, pulling over to the left, or stopping dead center in the lane of traffic can create a collision. The last thing you want to do is add to whatever problem led to the officer pulling you over in the first place.

DO NOT Exit the Vehicle â?? Stay in your seat with both hands on the steering wheel. Exiting the vehicle could cause harm to either you or the officer. Traffic stops gone wrong kill people every year due to the officer or the driver of the other car being hit by approaching traffic.

DO Save Your Arguments â?? If you have reason to believe that you were cited erroneously, then save it for court. And if the charge involves driving under the influence, also called a DUI, then there the any number ofÂ personal injury lawyers that you can hire to help lessen the charge or perhaps expunge it from your record completely.

DO NOT Ignore the Officer â?? If the officer asks you to move your vehicle to a safer location, asks to see your proof of registration or vehicle registration, or asks you to step from the vehicle, comply with the request. Refusing to do so tells the officer that you are potentially acting guilty about something.

DO Ask for Clarification â?? If you arenâ??t sure about what to do next, by all means ask! The correct information could mean the difference between the judge going easy on you during you day in court and extra charges being added should you for some reason not show up at all. You can always call the police station the next day to confirm things as well.

When a collision occurs, the police are almost always called into the situation whether it is to issue a citation, mediate between the parties and direct them of what to do next or just confirm that no one is injured. You can help prevent accidents by avoiding certain bad habits, like tailgating, respecting yellow caution signals at traffic stops, and stopping too close to the vehicle that is in front of you.

Another frequent cause of collisions is distracted driving. Sadly our lives have become so busy that multitasking has spilled into every aspect of our lives, including driving. Whenever you are behind the wheel of a vehicle, it is imperative that both hands stay on the steering wheel as much as possible.

Tasks like talking on the cellphone, drinking a cup of coffee, reading the newspaper, or applying cosmetics are not only distracting, but these types of everyday habits can also be deadly if youâ??re trying to do them while drive at the same time. Thatâ??s because they cause you to take your hands off the wheel and your eyes off the road.

Implementing rules about no food or drink in the car, leaving the cellphone turned off while the carâ??s engine is running, and listening to the news on the radio are easy ways to drive with less distractions. It might be difficult at first to make these changes if youâ??re already using the bad habits, but in the long run you are only making the highways safer for everyone around you.

Freelance writer Benjamin Baker is addicted to two things â?? his job and his family. While his job leads him to sites likeÂ www.bgs.com in his quest to learn new things, his family leads him to other places like antique sales and prime fishing spots. Whenever he can break away from his laptop Benjamin enjoys doing things like camping with his family or just playing music on his guitar.