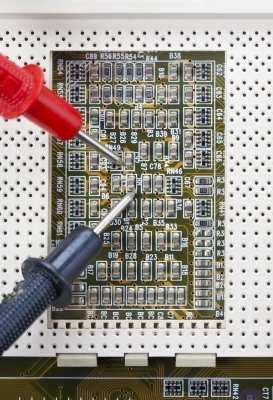 Designing and building automated electronic gadgets has never been easier since the introduction of the Arduino microcontroller.

Equipped with an inexpensive Arduino kit, a few simple electronic components, household items and hand tools, lots of people have started any number of projects that provide hours of entertainment or actually serve a useful purpose. Â Armed with a copper wire stripper and soldering iron, people have built robots and drones and have automated their homes.Â  Itâ??s not quite The Jetsons but itâ??s close.

This pint sized robotic craft merely needs a wireless camera and builders have the perfect spy drone. The quad copter ascends, descends and flies in any direction at the desired height and itâ??s incredible to think that this is something you can build at home.

The ingenious little contraption also capably avoids obstacles thanks to the inclusion of IR and sonar sensors and everything is routed through a series of separate Arduino Pro mini boards (the quad copter requires multiple analog inputs).Â  Due to the limited I/O the inventor is changing the microcontroller he uses to another in the Arduino line, the new ArduPilot Mega. Â You can control the drone with a remote or you can pre-program an automatic flight plan. The instructions provided by this aeronautic enthusiast include flight codes for indoor or outdoor use. Add some strong LEDs and the fun continues well into the night.Â  The LEDs will provide a bright light while reducing the added load on the batteries.

If R2D2 and Wall-E had a baby-bot, the offspring may well resemble this adorable droid, the mascot of Googleâ??s Android mobile phone operating system. Created by a Taiwanese electronics enthusiast with little more than a few hand tools and a trash can, the entire project required only three days time and around $100.00 for completion. The basis for this project involved converting a flip-top lid trash can and adding actuators, relays motors and an LCD screen.

An Arduino microcontroller was used to control everything and he did such a good job that he even got featured on Taiwanese news.

Once finished, the android boasts color changing LED eyes, movable arms and the ability to travel in any direction. A joystick equipped remote transmits the programmed commands. Charging the Android is via a USB socket behind a hidden panel in his butt.Â  One of the benefits of this build is that is very easy to fit everything you want into the large body of this design.Â  If you want to use this idea for a differently shaped robot, remember the amount of electronics you are going to need to package.Â  If you are building a replica of Jonny 5 from Short Circuit, he has a relatively thin torso and small head and so youâ??ll need to package most of the electronics in the base.Â  Using relay sockets on a breadboard might make things neater but youâ??ll have to work out the correct scale for the robot or risk having a project that canâ??t be finished.

This invention combines the love of electronics and music into one unusual display. A single beam of light streams skyward and fans out into eight separate beams of laser light. Breaking each beam with a hand produces a note. Change notes by moving from one beam to the next or by moving a hand up and down over a single beam. The laser harp produces MIDI information passed on to a synthesizer, which makes the actual sound. Besides an Arduino microcontroller, the harp also borrows components from a WiiMote and although it isnâ??t a build for novices itâ??s documented well and, as long as you know the right end of a soldering iron and how to hold a digital multimeter, this is a project that you should consider.Â  It provides the same kind of experience as a Theremin (the instrument made famous on the Beach Boys song Good Vibrations) but is much more adaptable and, because the sound outputs through a synthesizer, it isnâ??t nearly as â??whinyâ? as a Theremin.

Whether a complete novice or an electrical engineer, Arduino simplifies your electronics project.Â  The adaptability and I/O options are almost secondary to the open-source nature of the software.Â Â  There is a large and supportive open-source community who are happy to share their ideas and expertise and if someone hasnâ??t already thought of a solution to your problem, theyâ??ll probably solve it as quick as anyone.Â  All of the really cool gadgets that people imagined arenâ??t just real, I can find half of them in my parts catalogue.

Christopher Parkinson originally studied microprocessor design theory before testing phone lines and repairing faulty circuit boards for a couple of telco companies. His interest in electronics started at an early age when he used a screwdriver to open up a video game console to see how it worked. These days Chris is a home electronics enthusiast who enjoys tampering with the latest technology when not writing about the latest uninterruptible power supply technologies.