**WARNING** The deep Web is not for the faint of heart.

The deep Web is technically classified as websites that the public doesnâ??t have access to. The way most people find desired information is by using a search engine. If a website cannot be found through a search engine then we can say that it is part of the deep Web; because the information is buried deep within theÂ internet. Anything that is accessible publicly through search engines is referred to as the surface Web.

Although websites that are in the deep Web cannot be found by search engines, there is another way to access them.

Tor is a system that was first funded by the US Navy to protect government communications. Tor makes it hard to trace someoneâ??s online activity by encrypting data and sending it through random routes. This system was so effective that eventually people started using it for many different reasons.

People that lived in countries that censored their internet could now access anything without fear of being tracked. Individuals could use Tor to keep their identity and browsing history private. With Tor, civil liberties can be protected online and freedom of speech can be expressed by people in countries where they would be normally oppressed.

Tor is a virtual network hidden within the internet. Websites hosted on Tor use .onion domains. You cannot access these websites without using the Tor gateway and becoming part of this system. For that reason search engines cannot index the deep Web. This makes Tor the ultimate outlet for sensitive information because everything is off the record.

So naturally this network will attract a lot of legitimate users as well asÂ illegitimateÂ users. Because the Tor network is open and anonymous there is information there that attracts hackers, assassins, scientists, inventors, activists, government officials, police, and more. It may seem as if the deep Web is malicious when it really is just an open network. As with the surface Web you cannot really control who uses the internet and what they use it for.

The deep Web at this level is like a hidden library. There is no search engine for finding information although there is a detailed directory of the websites hosted on Tor. These websites can include anything from scientific research to online drug stores.

If you are looking for unreleased scientific information or the works of deceased inventors, this is the place to find it. If you are looking for first hand accounts of living in North Korea and other communist countries, this is the place you would come to research. There’s blogs, forums, and directoriesÂ scatteredÂ across the deep Web that cover any imaginable topics.

The deep Web is also a place where whistleblowers publish their leaks. Since the whole network is anonymous it is easy for people to leak information and news. While people may publish leaked documents alleging government and corporate misconduct, it is important to note that it is also easy to fake leaks. The reputation of people who release leaks is based on whether their predictions become true, or their past leaks have been confirmed byÂ officials. At any rate it is quite hard to discern truth from fact since anyone can “leak” information. I personally wouldn’t trust these leaks seeing that a company can provide “leaks” of their competitors.

A public website named Wikileaks was created in 2006 which would publish all these allegations from within the deep Web. An example of the information that was published in the deep Web is 779 secret files on the prisoners detained in Guantanamo Bay.

Wikileaks isn’t protected by the same anonymousÂ safetyÂ net that the deep Web is. Much controversy and charges surround the entire website. As of today 8/8/2012 Wikileaks is down.

To access the deep web you will need to download Tor. Afterwards extract the file that you downloaded and open the extracted folder called Tor Browser. In that folder there will be an application that is named Start Tor Browser, open it.

It will take a while for the program to setup random anonymous routes for your traffic. When Tor is finished loading, a custom FirefoxÂ browserÂ will open up, in which you can navigate toÂ kpvz7ki2v5agwt35.onion. Just enter that link in your address bar and wait a few minutes at most. This link takes you to something called “The Hidden Wiki” which is the most known directory of the deep Web.

If you don’t want to try exploring the deep Web yourself, you can click on the image below to see how the Hidden Wiki looks. 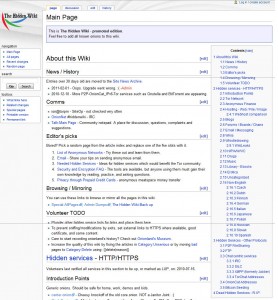 Screen shot of the Hidden Wiki

Other Uses of Tor

You can also access normal websites using Tor. When you do this your IP address will beÂ completelyÂ masked. There are even operating systems out there such as Tails, that encrypt and Torify all of your applications data.

One thing to watch out for is that there is aÂ vulnerabilityÂ to Tor. All of your data has to beÂ decryptedÂ at a Tor exit node and then sent to the server address you are trying to access. Whoever has control over this exit node will be able to see all of your data. So to be 100% anonymous you must use a VPN and Tor. You can learn more about how Tor functions at their website.

Although the usefulness of the deep Web can be debated, one thing is for sure. Any information you seek, can mostÂ likelyÂ be found in the deep Web.

The deep Web may haveÂ malicious information. This website does not condone or promote illegalÂ activities.Â Â Although there are many practical uses for the deep Web, it is important not to get involved in harmfulÂ activities. The deep Web is like a city, and any harmful information is like a dark alley. Your best bet is to not wander around and get yourself in trouble. If you see something on the hidden web that looks fake, such as a hitman network, do not be tempted to check these things out! Nine chances out of ten you will actually find yourself on a hitman network!

I canÂ attestÂ to this software being useful in countries where your ISP may censor your internet. Recently I had a friend that was visiting a country, and his ISP was blocking Youtube, Facebook, and otherÂ websites. Guess what I recommendedÂ to him?

The Economy of The Deep Web

The deep Web has its own currency called Bitcoins. Bitcoins is a cryptocurrency that is decentralized and serves as anonymous electronic cash. Naturally this payment type would appeal to most criminals, and sadly that is what it is mostly used for. The fact that someone can pay hitmen and buyÂ guns through an anonymous deep Web with an anonymous currency kind of freaks me out. Luckily police and internet vigilantes often try toÂ take down illegal websites.

1. The information given about the size of the web is based on a study from 2001. Although this study may be seen as “outdated”, it still serves the purpose of understanding how much bigger the deep Web is when compared to the surface Web.

Click this link to find out why the Deep Web can be very dangerous.