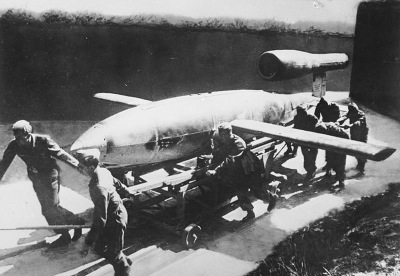 In 1939 the idea of a flying bomb was proposed to the Luftwaffe.

This proposal was surprisingly rejected and then rejected again in 1941. However, when the Luftwaffe started to take heavy loses they considered the idea again in 1942.

The V-1 flying bomb is also known as the ‘Doodlebug’ or ‘Buzz Bomb’ and the codename that they chose when they got started on developing the bomb was ‘Cherry Stone’. The first series of the V-1 flying bombs were intended to terrorise London and the very first V-1 flying bomb was launched at London on June 13th 1944.

The V-1 flying bomb had a range of around 150 miles and used a pulse jet engine designed by Fritz Gossiau building on the earlier work of Paul Schmidt. The pulse jet engine in the doodlebug worked by air being mixed with fuel which was ignited with spark plugs. The combustion in turn forced intake shutters to close which produced bursts of thrust out of the exhaust at fifty times per second. This is what gave the doodlebug its ominous buzzing sound. The average speed of the V-1 flying bombs were 350 mph.

When the V-1 flying bombs were launched at their production peak, around one hundred V-1s were fired at the southeast of England. Nearly 10,000 in total were launched until October 1944. The doodlebug attacks caused around 23,000 casualties which were mainly just ordinary civilian casualties.

British forces put up defences such as guns and fighters in the air to intercept the V-1 flying bombs in an operation called ‘Operation Crossbow’, which also involved pinpointing launch site and underground doodlebug depots and targeting them on bombing raids.

The construction of the V1-flying bombs were crude and cost effective, with mostly welded steel for the fuselage and plywood wings. Hitler named the doodlebug Maikafer which means ‘May bug’ in English.

The V-1 flying bombs were launched off of a type of ramp known as the Dampferzeuger (steam generator) which launched the doodlebug of at a speed of 360 mph. The doodlebug was guided by a simple autopilot that regulated the bomb’s airspeed and altitude.

There was initially a fuel intake problem with the V-1 flying bombs, as when they dived steeply, which was intended to be a power dive, the fuel flow would cease which stopped the engine dead. This was the reason people would hear an eire silence before impact. This caused many doodlebugs to hit under power, although this problem was later fixed.

My grandmother said that when a doodlebug cut out, people would count to seven before impact, as when you reached seven the impact would sound, and she said that she would usually hide under the table with her family when they came over.

Several spin-off variants of the V-1 flying bomb were developed which were piloted. However, on test flights the pilots were unable to land safely and died, which meant that they were never used in combat.

The doodlebugs were extremely hard to hit by guns deployed in Operation Crossbow and were frustrating to try and shoot down. For one thing they cruised at an altitude of around 2,000 to 3,000 feet which was just above the effective range of light anti-aircraft guns and just below the optimum height for engagement by the heavy guns. They were also very small targets and hard to hit anyhow. So, new technology was needed to counter this problem.

Gun-laying radars helped to counter the V-1 flying bomb’s speed and size and Bell Labs came up with a predictor fire control system which was based on an analog computer. This new technology arrived in June 1944 and enabled guns to shoot down between 60% and 80% of the doodlebugs.

Around 2,000 barrage balloons were deployed with the idea being that the V1s would hit the cables and be destroyed. Only around 300 V-1 flying bombs were thought to have been stopped this way, as Nazi Germany cleverly fitted cable cutters onto the wings of the doodlebugs.

Fighter planes ran sorties to try and destroy the V-1 flying bombs in the air. This was extremely difficult however as machine gun fire had limited effect in most cases and if the warhead was triggered it might destroy the attacking plane. A special defence zone was set up with only the very fastest fighter planes allowed in. This was quite successful as hundreds of V-1 flying bombs were shot down. The Mosquito shot down 623, the Spitfires 303 and the Mustangs 232.

By September 1944, the attacks from V-1 flying bombs were halted temporarily when advancing Allied armies overran launch sites. The last V-1 launched was on 29th March 1945 which hit Datchworth in Hertfordshire.