Lithuanian Engineer Julijonas Urbonas has come up with a prototype for what he calls the ultimate thrill ride and humane form of euthanasia – a roller coaster which kills. 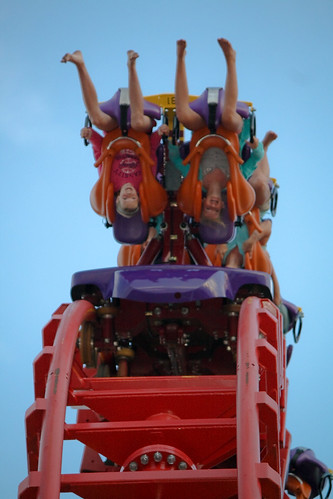 The ride, titled the Euthanasia Coaster, is designed to last for three minutes.Â  The first two minutes are spent climbing a steep slope.Â  Once you have reached the top of the roller coaster, you are given the chance to decide whether or not you really do want to go through with the ride.Â  Back out, and you live.Â  Take the ride, and you die.

The roller coaster drops you at high speed, then takes you through a quick succession of loops, each one tighter than the last.Â  The next one minute will be one that redefines the term “ride of your life”. The spinning motion acts like a centrifuge, making the blood rush away from your brain.Â  At first, this creates a sensation of euphoria, then you lose consciousness, and finally you die through lack of oxygen supply to your brain.

There are a couple of exceptions to this.Â  If you were wearing the “zero-g” pants that fighter pilots wear to help them cope with extreme G-Forces, then you would remain conscious, get to enjoy the ride and live to tell the tale.Â  In addition, if you are a quadriplegic then you would not have enough volume in your lower extremities for blood to pool, and you might survive. Of course, there are no guarantees – this is a ride that would take its toll on anyone.

After plunging 500 metres and achieving a speed of almost 220mph, the coaster will go through ten loops, keeping the passengers under a force of 10g for 60 seconds.Â  Trained pilots are capable of handling a sustained force of 9 through training, and short term forces that are significantly greater than 9g are survivable, but the repeated inversions on this coaster will lead to GLOC (loss of consciousnesS), and death.

Urbonas, who is currently taking his PhD at the Royal College of Art, says that his rollercoaster is an exercise in something called Gravitational Aesthetics.Â  His aim is “to take the life of a person humanely, with elegance and euphoria”.

The roller coaster is just a prototype at the moment.Â  It was inspired by a quote by john Allen, one-time president of the Philadelphia Toboggan company.Â  Allen said “The ultimate rollercoaster is built when you send out 24 people and they all come back dead.Â  This could be done, you know.”

Urbonas spent his childhood working at various amusement parks, so it’s no surprise that his imagination was triggered by that comment.

The prototype has been met with much controversy.Â  While some people imagine that it would be a nice way to go, those who are against the concept of Euthanasia have expressed concern about the possibility for abuse.Â  Urbonas himself does not expect to see the roller coaster be built for real for quite some time, saying that it could only exist in a “future where the politics of technologies are much less centralized and more creative, diversified and democratic”.

This guest article was written by Alison Parcell of Westermans International, providers of high quality welding and cutting equipment.