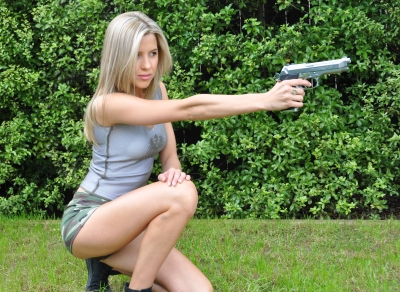 My day job is in an office building doing data entry for an internet company. Not very glamorous, but it pays the bills. Last year, Christmas time of 2011 to be precise, Cass, a coworker of mine, bought some toys for my manager and the three team leads.

These toys were meant to be fun and help spice up the boring day to day that working in an office can, and most often does, become. Little did she know how her thoughtful gifts were going to unleash a hell on earth for the Data Entry department.

These â??toysâ? werenâ??t just toys. Oh sure, you could probably find them on any toy store, or as I like to call them, Timmyâ??s First Gun Stores; but what toy isnâ??t a weapon in the wrong hands? Approximately 5â? in height, these weapons came cleverly disguised as cute little dogs. Cute and innocent enough, but these graven images of manâ??s best friend were built for a more dastardly purpose.

By loading a small foam ball into its mouth and gently squeezing, these â??dogsâ? became miniature artillery devices. I donâ??t remember who struck first, maybe it was Chris, the manager, in an attempt to establish his dominance over the team leads: Kandi, Corie, and Krystal. It doesnâ??t matter who fired the first shot anymore. The only thing that matters is that war broke out. The fighting was always gruesome with many innocent bystanders were falling prey to their relentless assaults and terrible aim. It didnâ??t matter that the fighting seemed to only break out in the afternoon just as quitting time rolled by on the clock, what mattered is that the fighting needed to be brought to an end. Each battle brought new victims: empty coffee mugs, a slinky collection, my sandwich! The death toll was nearing the dozens. Someone needed to bring the fighting to an end. It was time for a new power to step in and force the piece.

A New, Superior Foam Based Weapon

After I decided enough was enough, I took matters into my own hands. After work, I drove to my trusty neighborhood weapons dealer: Target. My purpose firm in mind, I stalked to the where the â??toysâ? were kept. So quick and fierce was my pace that after only one employee attempted asking me how he could be of assistance, that I coldly ignored, the rest of the red shirted employees ignored me and went about their business.

In the toy section, I quickly found the aisle I was looking for. The shelves were cluttered with rows of useless knock offs that felt cheap with a single glance. No, I didnâ??t need a piece of junk that would break after just a few uses. I needed a toy that would last, deal damage, and look cool doing it. I needed Nerf.

At the end of the aisle I saw it, my prize, my toy of peace. In a shining box of red and orange, and for less than $10, I had found my ticket to dominating over management and securing peace for those who yearned for it: the Nerf Maverick.

With a fast loading 6-bullet chamber, the Maverick was the perfect weapon for me.Â  It was small enough to hide in my desk, but large enough for me to grab easily to defend against a surprise attack. This was going to be sweet.

The Good, the Bad, and the Nerf

The next day, I smuggled in my gun under my coat and hid it in my desk drawer.Â  I waited. Oh the torment of waiting. But I would not be the instigator. I would not allow hast to unravel my plan for peace.

Minutes crept by like hours, and the fact that it was a Friday didnâ??t help speed things up either.Â  Finally though, my patience was rewarded.Â  Chris, whose desk was right next to mine, pulled out his inferior weapon and took aim at Krystal.

I pulled my golden and black Maverick out of my desk, cocked it and fired at my manager. He never saw the attack coming. The team leads looked at me in terror as I turned my weapon on them and opened fire. An instant, a glorious satisfying instant, the war had ended. All surrendered to my firepower and swore to keep the piece.

Peace had come, but I would need to keep a vigilant watch to maintain it. I considered by looking at handgun safes to keep my precious Maverick in when not in use, but that would have added precious extra time that I knew I wouldnâ??t have to defend myself against an attack. But I couldnâ??t leave a weapon like this out in the open, so I kept it locked in my desk when I was out of the office, and unlocked my desk when I was there.

Andrew graduated from Utah Valley University with a degree in Creative Writing. He writes blog posts about office wars when not stuck in an office doing data entry. In his free time, Andrew writes fantasy novels.