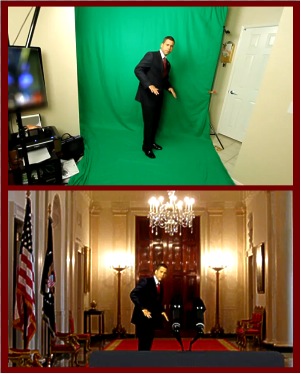 Have you ever wondered how the characters in your favourite movies were filmed dangling from dangerous cliffs, flying through the air or travelling through time and space? Do you wonder how they get the huge map moving and changing behind the weather man when he is presenting on television?

The answer behind these effects is the simple but very clever technology of the green screen. The very first Star Wars film was filmed using this type of movie-making technology and these days, (although computers make things a lot easier) the humble green screen is still used. It is commonly used in Science Fiction films and TV shows to make alien worlds and spaceships look real. Sometimes scale models are filmed and then combined with green screen footage in multiple layers to make it look as real as possible.

Some of the most famous scenes in well-known films have been shot with green screen, such as the flying bicycles scene in ET, the scene where Luke flies the X-wing fighter in Star Wars and the scene where the DeLorean time machine lifted off the ground and flew away down the street.

A Clever Movie-Making Trick – How it Works

Although the green screen seems like magic, the way it works is actually quite simple. It is a large green sheet that is placed across a wall. The actors are filmed interacting in front of the screen and then the footage is placed into editing software. The software is able to use chroma key to remove any single specific colour, so everything that is the particular shade of green is removed.

Once the green has been removed, the computer is able to replace everything that would have been green with another image. For example, imagine you are filming a scene where an actress is hanging onto a vine and dangling over a steep canyon gorge. Most of the time, your average Hollywood actress will not agree in her contract to actually do this, so you will need to simulate it with movie magic.

You will start by filming some footage on location of the canyon, which is known as the background plate. Then, you will film some shots of your actress dangling from a vine in the studio only a couple feet off the ground. These shots are filmed in front of the green screen, so that on the computer afterwards you can use the special filter to combine the two images.

It is important to ensure that the footage of your actor or actress matches the footage of the background, so that it will look as real as possible. If the actor or actress has the wrong tint or level of diffusion, they will look like they are a different colour or they are crisper than the background. When a computer is used to combine the footage, this makes things a lot easier because software can be used to ensure that everything matches up.

The only limitation of a green screen is that you cannot wear green clothing when filming. If you do, the chroma key software function will remove your clothing from the film as well. This means that the background you have chosen will appear where your shirt should have been and you will look just like a pair of pants with a floating head and arms above them!

Now that you know how green screens work, next time you watch a film and see an actor in an impossible place or situation you will imagine them in a studio in front of a bright green screen and be amazed by how realistic this clever cinematic trick can be.

Pipa Rose is a writer who is amazed by the brilliance and magic of green screen technology. If you want to learn more about how this technology influences the making of TV and film, then you should contact experts at TV studios in London.