In a series as long running as Batman, villains run the entire spectrum from silly one-offs to genuinely sinister enemies. Sometimes, over the course of a 60+-year history, they end up as both. Mr. Freeze is one of these.

Who Is Mr. Freeze?

Mr. Freeze is the super-villain name for a scientist named Victor Fries. In nearly every iteration, he is a cryogenics specialist, which is where his association with cold comes from. Most often, he is trying to find a way to cure his terminally ill wife of her unspecified disease. In the process of trying to find a cure, an accident occurs, which causes Fries to need an incredibly low body temperature or else he’ll die.

Mr. Freeze started as Mr. Zero, a joke character in the early TV show and comics. He had no history and served as a vessel for ice-themed puns and winter episodes. At one point, the Joker even killed him. It wasn’t until Batman: The Animated Series that he received his tragic history and his sick wife, leading to a much more anti-hero personification.

These days, Mr. Freeze is working to build a criminal empire to raise the money and research the technology necessary to cure his wife. He has a noble goal in mind, and is only an enemy of Batman because of his methods for raising the money.

The Powers and Abilities of Mr. Freeze

True to his name, most of Mr. Freeze’s powers and abilities center on ice, cold and low temperatures. He is usually contained inside a cryogenic suit that keeps his body temperature below freezing. This serves to keep him alive, but the suit often has various modifications to enhance his abilities. He generally has some form of super strength and armor built into the suit to keep him alive.

The iconic weapon that Mr. Freeze wields is a freeze ray. While its exact range of abilities varies from comic to comic and show to show, it generally is capable of leaving icy trails on the ground, freezing people in block of ice, and generally doing anything that ice used as a weapon can do. In some cases, Mr. Freeze doesn’t need the gun to control ice in some form or another.

Mr. Freeze in Television and Movies

Mr. Freeze has been played by a number of different people, from George Sanders to Otto Preminger, Eli Wallach to Arnold Schwarzenegger. He has been voiced by another selection of actors in the animated series and movies, including Michael Ansara and Lennie Weinrib. Freeze’s portrayal by Schwarzenegger in Batman & Robin has been widely criticized, considered too campy and too focused on puns and jokes, despite including his tragic history. 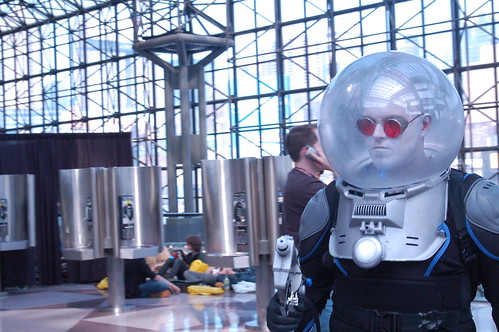 Peter Wendt has been an avid reader of graphic novels for many years. If you’re looking to stay as cool as Mr. Freeze this summer, Peter recommends his readers check outÂ Pfulgerville air conditioning.

Click here to find out how to become BATMAN RELOADED.