The ZX Spectrum was first introduced to the world in 1982 by Sinclair Research Ltd. It was the brainchild of Sir Clive Sinclair; an English entrepreneur and inventor whom was knighted for his services to the British Industry.

The ZX Spectrum (pronounced “Zed-Ex”) was just as popular with home computer users in the UK, as the Commodore 64 was in the USA.

Although the ZX Spectrum was not spectacular, it did create a boom in companies producing software and hardware for the machine. BBC even attributes a technological revolution due to the ZX Spectrum. 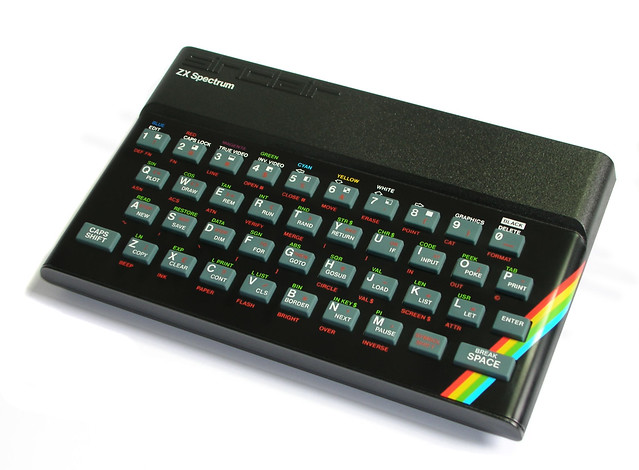 The creation of the ZX Spectrum was spurred by tough competition. The BBC Microâ? was far superior to the previous ZX81. It had color, sound, and a good keyboard. BBC Micro was retailing at Â£399, and Sinclair knew he could dominate the market if his new computer was priced at less than Â£200. By cutting back and using ZX81’s previous technology Sinclair would be able to hit that price margin. Plans for the Spectrum Super BASIC programming language were cut and instead focus went into improving the old ZX BASIC. By making the keys rubber the Spectrum ZX was able to achieve a hi-end look like nothing ever before.

Sinclair was successful in his new creation released in April 1982. The ZX Spectrum came in two forms. The 16k model which sold at Â£125, and the 48k model retailing at Â£175. Criticism came in about the keyboard, the processing speed, and the programming system. This was all irrelevant as the market was still fresh and the audience didn’t really have any expectiations of computers. The ZX Spectrum made average users interested in technology, and not just the computer hobbyists. In short this product was a success. Within four months, ZX Spectrum orders were backlogged at a whopping 40,000 angry customers.

Shortly after the ZX Spectrum was released, the Commodore 64 followed. It was very advanced; it had 64K of memory, 16 colors, a built in sound chip, and a 40 column screen. The Commodore 64 retailed at Â£350 in Britain. Meanwhile the software market was growing exponentially for the ZX Spectrum, making the demand for an even better ZX model imminent.

The ZX Spectrum+ was released in October 1984. It featured 48K of RAM and a reset button. Technically it was identical to the previous ZX Spectrum 48K. The system boards were similar, so similar in fact that you could move the ZX Spectrum board into the new Spectrum+ case without any problems. There was only one real benefit in the Spectrum+; it didn’t have rubber keys which turned off previous users. This new model retailed for Â£179.95. Although the Spectrum+ outsold the previous ZX Spectrum 2:1, it was a failure. Some retailers such as Boots reported a failure rate of 30% compared with 5-6% for the older model.

First launched in Spain in 1985 this new version was hardly any different than the Spectrum+; other than the new large and very hot heat sink on the right hand side. Some new features included a three-channel audio chip, MIDI compatibility, an RS-232 serial port, an RGB monitor port, and a new improved BASIC editor. The release of the Spectrum 128 was held off in the UK due to many unsold Spectrum+ models. When the Spectrum 128 finally reached Britain in February 1986, it was too late. Christmas season was over and no one was interested in the new model, which retailed at Â£179.95. There were also some problems with the Spectrum software and it’s peripherals. Sinclair, still having trouble with their supply was taken over by Amstrad a few months later and the Spectrum 128 was silently discontinued. 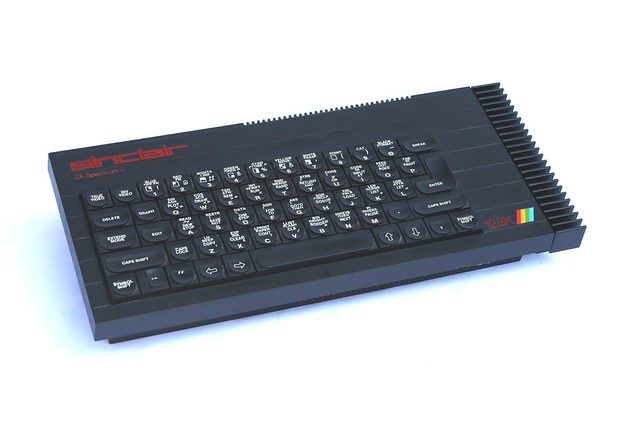 Shortly after purchasing the Spectrum and Sinclair brand in 1986, Amstrad came out with the Spectrum +2. It featured a new spring loaded keyboard, a built-in tape recorder, and twin joystick ports. The keyboard no longer included BASIC keyword markings found in earlier Spectrums. Amstrad built the new models in Taiwan greatly increasing quality control over the old models. Amstrad also put a new spin on the sales of the Spectrum +2 models, advertising the computer as nothing more than a gaming machine. They were often sold in packages such as “James Bond 007 Action Pack” that came with games and light guns. This was a step from using computers for conventional work, and hobby reasons, to main stream gaming. The Spectrum +2 sold very well for Â£139-149 due to dropped production costs.

Amstrad’s final Sinclair machine was launched in 1987. It included a floppy disk drive, a new ROM, and a parallel printer port. The motherboard had significantly less circuits than any other Spectrum. Like the Spectrum +2, the new model was also sold in gaming bundles that came with guns and games.

The Spectrum +3 experienced many of the shortcomings the Spectrum 128 had. Its new ROMs were incompatible with older Spectrum software. The disk drives were not using the mainstream 3.5inch formats, rather Amstrad’s own 3 inch format, and the machine cost was Â£250 at it’s release. The Spectrum +3 was an 8-bit machine, while the 16-bit market was taking over.

The End of Spectrum

The Spectrum line was discontinued in 1992.

If you would like to try out Spectrum ROMs for yourself, you can! There are two options you have. One you could buy a Spectrum machine for $20-$100 on eBay; or you can try out an emulator. You can emulate the Spectrum ROM virtually using this website, or this Windows program.