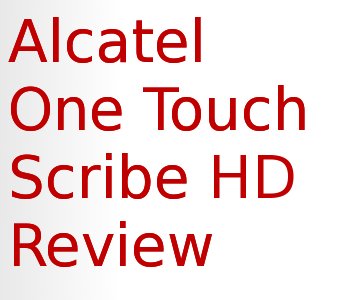 Perhaps the mobile market was severely missing out on was a phone with a stylus. Sure, there are plenty out there but there was a niche for another one to fill. The Alcatel One Touch Scribe has not captured the imagination of the public or critics to a great degree though.

As touch screen mobile phones go it has reasonable specifications; a 1.2 GHZ quad core processer, a 5 inch high definition display, 1 GB of RAM and Jelly Bean as the operating system (Android). The statistics and specifications certainly make the phone look like a high end competitor.

This One Touch Scribe is covered in a glossy plastic bag casing. The look and feel isnâ??t really premium and certainly it doesnâ??t impress in the same way as many of the other phones in the industry do – such as the Google Nexus 4, the iPhone 5 and the Samsung Galaxy Note 2 (also spotting a stylus).

The phone is relatively slick with a thickness of just 8.5mm.One touch operation is pretty simple, fits nicely in the hand and the power/ lock key is easily accessible to the phone.

The phone only comes with 4 GB of internal storage and 2GB is already taken up. So the internal memory is only 2GB. Fortunately there is an easily accessible microSD slot designed to increase the memory. It really is a bit of a puzzle why Alcatel have chosen to put so little memory in a phone that is clearly designed as a media power house.

Obviously the Jelly Bean interface is easy to get around and there is no navigation buttons just as Google phones and android phones. As with other Alcatel handsets, the operating system has its design altered with new styling and icons and a few new applications.

Operation is fast and navigation is simple. The keyboard and the touch screen default toÂ the android version which is quite usable and known by many already.

With such a massive 5 inch screen users who watch video on their phones will enjoy the experience. The screen does not match many of the competitorsâ?? though on image sharpness and definition and some may find it a bit of a letdown. The camera on the phone is 8 megapixels, on the back and provides reasonable image quality through the addition of an LED flash for situations where there is poor lighting. On the front there is a 1.3megapixel camera if you ever feel a little vain.

The stylus that comes with the phone is to all intents and purposes pointless. It looks like a pen, is clumsy and it is a waste of time. Like a pen you twist the nib for the pointy bit to come out and in reality the pointer isnâ??t much more accurate than your finger.

You should probably avoid this phone if you want to spend your money on things with a good value for money.

Phil Turner is looking at touch screen mobile phones for himself to replace his ancient flip phone.