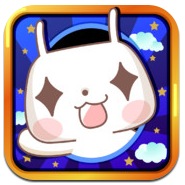 TouchMii, a universal app by developer Distad is a game where you get multiple games rolled into one single app. Fantastic fun!

This game really tests your hand/eye coordination, as you progress through different mini game puzzles. There are over ten different mini games contained in this app! With updates in the future to add even more levels and mini games. This app is great value for money at just under $1.

When you first open the app, the first thing you notice are the cute graphics and catchy music. An animated introductory screen is the first screen you see with cute sheep, a rainbow, shooting stars and a revolving world full of nature. On this screen you can access Facebook, view your level and skills status and see what awards you’ve won.

The first level is a game called ‘Tap the coin’. An animated magnet comes down and opens the level for you. In this mini game you have to tap on coins that are revolving around before they disappear. If you tap on a panda the game gives you extra time. This was really fun to play as the coins are on a split screen, so you have to coordinate both hands to tap on coins at the same time. Not an easy task and I found myself laughing as it was so much fun, Â my coordination to begin with was rusty to say the least. 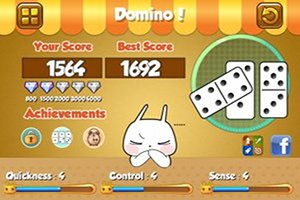 You gain points in each mini game and you can unlock diamonds, depending on how high your best score is. When you reach midpoint on the diamonds achievements the next level is then unlocked for you. There are also three achievements to go for on each level for which you can gain an award for.

As you progress though the game your ‘Quickness’, ‘Control’ and ‘Sense’ levels improve, giving you extra control. This means that even if you have completed a level, you can replay the level with your new enhanced skill settings, making each mini game repayable. You are given a rank title depending on how much you have progressed through the game and what your scores are like. For instance you can progress from ‘Samurai’ to ‘Ninja’. I’m now at ‘Tribe Leader’ level, although I’ve still got a long way to go in the game. When you progress to a different title, neat particle effects fill the screen with balloons and streamers flying around.

When I unlocked level 2 in the game, I was surprised by the fact that it was a completely different game. These mini games are not spin-offs of the same idea, they are actually completely unique and different from one another. Level 2 is called ‘Jump to the moon’ where you have to touch 3 different coloured control buttons so that your character ‘RichMii’ can leap to different coloured platforms against the clock. Each time you start the game the control buttons change order. This game tests your coordination to the max.

Level 3 is a game of quick thinking where you have to tap on dominoes from the lowest to the highest in number. Again, a totally different mini game.

Level 4 is a mini game called ‘Memory Dance’ and boy does it test your short term memory capabilities. It starts off a bit like Simple Simon, but with a dance theme. Each of the four colours lights up in sequence and you have to tap the same sequence of colours. Just when you start to think that it may be easy, the colours start to swap places with each other. The trick is to remember the colour sequence in your mind.

Level 5, called the ‘Yum Yum’ level, is a game where you have Â to catch food falling from the barbeque. This level is not easy and is a barrel of laughs. I kept getting a really good stack of food on my plate, only to have a bomb drop and wipe the contents of the plate clean. At this level you realise that you may need to replay some previous levels to get your skill levels to rise. Again, all these levels are fun to replay and you can also achieve better scores, a better skill set or go for more achievements. TouchMii is also GameCenter enabled, so you can compete with friends to achieve the best score.

There are many more levels to play after this, but I’m not going to spoil the surprise of the mystery of what could be next . . .

Although on the iTunes description page it quotes the game as having 10 levels, I can currently see 12 levels, so there are already bonus levels included.

The game is is not too easy and not too hard. You get a lot of gameplay out of the game as you replay levels, and you have to increase your skill set before moving onto other higher levels. The graphics are very nice and cute. In fact, the whole game has a kind of ‘cute’ feel good feeling to it. The best thing about this game is that if you download this app you get many mini games all contained in just one single app. Fantastic value for money.

It is hard to suggest an improvement for an app as good as this and one that offers so much value for money. One suggested improvement for the developer could be to implement a short animation about the character RichMii, to make the player aware of why he’s travelling around on a puzzle solving adventure. The main character is very cute and with a short animated mini story appearing when you first open the app, on the very first time you play it, it could launch the popularity of RichMii and make the character even more rounded. Take Sonic The Hedgehog and Super Mario for instance, the character alone sells the games.

A very varied and addictive game with many different games all rolled into one single app. It takes skill for a developer to create many spin-off levels in a game, but creating a game with a completely different game for each level demands high level app development skills and a lot of time creating the app. I take my hat off to the this developer’s excellent achievement in creating a top class app. Excellent app and fantastic value for money!