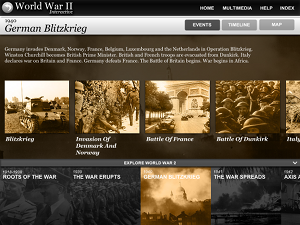 What I like about this app is that there is a great video intro with clear sound to get you into the mood of reading about the history of World War II. In the app there is a great world map, which you can use as a reference. You can see the western allies, Soviets & their allies and also the axis powers and their allies, detailing which territories they controlled. The app book opens with the choice of an events view or timeline view. Beginning with the ‘Roots Of The War’ and the rise of Adolf Hitler, you are then taken on a timeline journey through history, together with rich multimedia, such as sound, video and photos. You can click on either the photos, speeches or videos section to view specific groupings of multimedia.

I particularly liked the ‘Speeches’ section, such as listening to Winston Churchill’s famous ‘We shall fight them on the beaches’ speech. Listening to speeches back then, broadcast over old wirelesses, really gives you a spooky feeling that you are being taken back to that particular moment in time. You can view each stage of the war in detail. However, the information is in the form of succinct information that is easy to read. By far my personal favourite section of this app is the ‘Blitz’ section, as my grandfather’s house was blown up when he was working nights whilst manning an air-raid siren in Bath, England. I think that Britain is lucky that Hitler was off his rocker and decided to attack Russia, choosing to fight on several fronts, as the Nazis were very close to being able to invade Britain if they had concentrated their push in one direction.

The whole app book is just lovely to read and interact with, as the navigation is so smooth. I love the two separate scrolling panels in the ‘Events’ view, where you can select a timeframe form the bottom scroller and then view events broken down even further detailed sections in the top scrolling panel. The app book is packed with interesting information, such as which strategic targets were bombed in the Battle of Britain and why. The written information is very nicely laid out, with clear titles for each paragraph or section of text. The editing is very nice as there is a clear topic sentence, introduction, main body and conclusion. With overview information laid out on the right hand side of each article. So, in a nutshell, the information in this app has been put together with care.

If you want to find out in detail about the events of WWII, you can’t go wrong with World War II Interactive. The app book is a delight to read, very well put together and just so much fun to interact with. Who needs paperbacks anymore when there are app books like this waiting to be read, and for a cheaper price too, and kinder to trees. An excellent app!