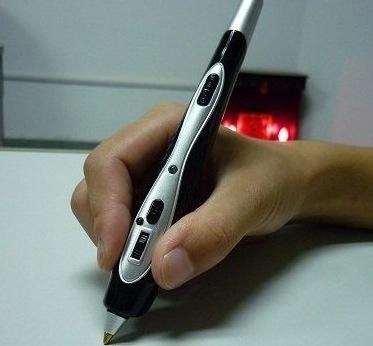 The new and innovative pen mouse hit the retail shelves in January 2013. It is the brainchild of a company aptly called, Genius. Unlike previous mouse incarnations, this very different mouse uses the guise of a fountain pen design, to channel the functions of a regular mouse.

The Look and Feel

The pen mouse looks and feels like an ordinary pen. It’s shaped like a pen and operates in much the same way as a pen. Genius has even gone so far as to design the mouse to look like a specific type of pen â?? a fountain pen. These types ofÂ  pens are usually fancier and much thicker than regular pens.Â  Thus adding to the overall high-end feel to the design.

The pen mouse is sleek and lightweight. It’s extremely easy to hold and the thickness allows for a nice strong grip. Overall this pen mouse is more like a PC pointer or stylus. It bears little, if no resemblance to the traditional mouse.

This crazy new gadget works on almost any surface. This is obviously a massive advantage when travelling and being without access to flat surfaces â?? something required by the majority of computer mice.

It is necessary to pick up the pen mouse after each use, however this small negative is easily outweighed by the ease of transportation factor. In addition, the time it takes to perform this extra action is so small that the majority of users may not even notice it.

Also, the fact that this gadget can be used in the same manner as a pen or pencil lends itself greatly to the graphic design industry. Sketching using a mouse or touchpad can be a challenge for designers. The pen mouse is well-designed to alleviate this problem.

The Functions and Features

As indicated earlier, the pen mouse resembles a luxurious fountain pen. However, it is much lighter than a normal fountain pen and is probably a lot easier to grip. This feature is of great benefit to those suffering from carpal tunnel syndrome. The design of the pen mouse eliminates excessive wrist usage, as it requires the user to hold the pen at a specific angle.

The button for operating right-click, left-click and scrolling functions is located at the tip of the pen mouse. To right click just press down at the bottom end of the button. To scroll depress the top edge of the same button. And to left click, it’s necessary to press down lightly on the tip of the pen mouse. All three functions take a little getting used to, but it becomes second nature once you get going.

The pen mouse is wireless and operates using one triple A battery. It comes with a nano-USB receiver, which facilitates the wireless capability. It has an automatic shut-off features that is activated after thirty seconds of inactivity. A great power-saving feature.

The pen mouse operates atÂ  2.4 GHz with a tracking resolution of 1200 dpi. The resolution can be adjusted downwards to 400 dpi or 800 dpi for slower cursor movement speed.

All in all the pen mouse can be a great addition to a user’s collection of computer peripherals. It can be used in conjunction with a traditional mouse or as a more permanent substitute. It all depends on your specific needs.

David is a freelance writer working for robustbuy.Robustbuy is a great place if you need to buy cheap mouses and keyboards for your computer!Check them out!