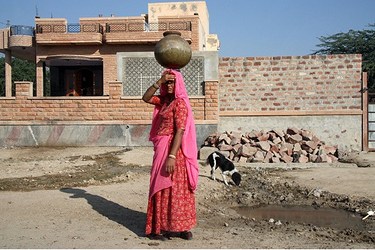 Water is generally taken for granted by those of us that inhabit the developed nations. We complain when we miss the bus, get a flat tyre or miss our favourite TV show.

Nobody can argue that these things are annoying but when you consider that 780 million people worldwide lack access to clean drinking water, what justifies a real problem suddenly becomes that much clearer…..

Potable water is a problem for many areas, particularly developing nations that lack proper water infrastructure or the financial resources needed to repair and improve their current systems.

Studies show that degrading water infrastructure results in the loss of up to 40% of potable drinking water. This issue is further exacerbated by poorly maintained sewerage treatment facilities and leaks in water pipes.

A new project called Sarvajal, may provide the answer to clean drinking water for the masses in India. This project focuses on developing water treatment facilities around the country, particularly in smaller rural areas. The water is treated close to the point of sale to decrease the risk of contamination.

The residents of the communities or towns pay for the water through solar powered ATM’s either in cash or by means of a pre-paid card system.

This new system aims to provide smaller communities in India that lack the infrastructure of larger towns, with a cost-effective solution to clean-water access.

A distinct benefit of the water system is that it allows people to buy water in specific quantities â?? Much in the same way that one would buy refill bottles for water dispensers London. This is important because those who couldnâ??t previously afford or simply don’t require larger amounts of potable water, now have the option to purchase smaller volumes.

The Sarvajal ATM water solution operates under the rules of a franchise and each micro treatment facility is owned by members of a community or village. This helps to increase efficiency as the owners understand the water needs of that area on a personal level.

A percentage of the profits made by each micro-plant is re-invested back into the Sarvajal franchise and used towards expanding into another area.

Many will disapprove of the practice of selling water in impoverished communities. However, the price of the water is much lower when compared to the price of regular bottled water (that residents would normally be forced to buy) and the creation of new jobs within communities provide clear benefits.

In certain developed nations people may still opt to install a plumbed in water cooler to improve the taste of tap water and for reassurance that any impurities have been removed.

This article was written by Daniel Stevens who is a fan of the great outdoors and when heâ??s not writing up a storm 😉 – thatâ??s where youâ??ll find him.