With all the news lately of cannibalism we realize that the zombie apocalypse may be near. So read up on this article to make sure you are prepared for a similar scenario.

For our thought experiment we will assume that the zombieâ??s infection is not due to some evil demon possessions. That hasnâ??t happened so far and a scenario like that sounds more like an apocalypse then a zombie attack. We can also expect that the virus will not be due to nanobots because by the time nanotechnology is that advanced there will also be antidotes for such viruses. Instead we are going to have our classic zombie virus. Letâ??s imagine that it is a deadlier strain of AIDS combined with mad cow disease for humans. The virus is not transmittable through the air or to any other species then humans.

The virus can be spread through intimate relationships and is dormant for a couple of months. Once bitten you become a zombie within a day.

5% of the population is carrying the zombie virus which has been spreading the past couple of months. No one knows it exists and there are no symptoms that go with the virus. Suddenly the individuals carrying the virus become infected and hungry for flesh. They still function normal enough to appear uninfected but secretly consume other humans. Eventually all hell breaks loose and zombies start roaming the streets and feeding on humans. Now more than 40% of the population is actively infected and feeding. The urban areas are the worst because almost everyone is infected.

You are an average Joe that has had his fair share of beers and nachos.

You donâ??t have a wife anymore but rather a video game addicted son. Although youâ??ve never shot a gun in your life you can pick one up if necessary. You aren’t as equipt as say… a Russian, but you should manage.

In most zombie movies the characters like to run around and kill zombies, or barricade themselves and then eventually die. Why would they do that you ask? Well because itâ??s Hollywood and they want to make a good movie. But in real life you would naturally make your way out to the coast and either clean out an entire cruise ship or boat and live on it, or travel to a small isolated island. So that is what your goal will be. For now you need to get as far away as you can.

You will most likely have about a week of food in your home. Collect as much water and food as you can and bring it to the garage. Bring your T.V. down there, your refrigerator, microwave, radio, any weapons, etc. Make sure all of your doors and windows are locked and lightly blocked by furniture.

You do not want to go out during the first few days of the zombie outbreak. People will be panicking and there is nothing you can do about that. In times of crisis zombies will not be your biggest problem, rather crazy looters with machine guns and grenades. 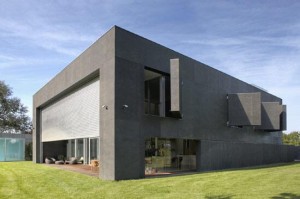 Lock your garage door and listen to any news if there is any. Something you will want to do is spray any smelly substance on your door edges/garage door. WD-40 works well. Zombies can smell humans and you donâ??t want your smell leaking. Iâ??m not some sort of smellentologist but hopefully the WD-40 will break down any human smell escaping through the edges. Pack your car with food, essentials, shovels, hammers, and any weapon you can pick up.

Another thing you could do if the internet is still up is to download as many guides on outdoor surviving and other important information. Print anything out that is really important, such as maps. Look for places the government or other humans are setting up as shelters. Note these places so you know where others are. Do not try going there as the locations will be far away or very crowded and dangerous.

Depending on your food supply you could either wait until zombies are pounding away at your door or your food is low. Put on any leather jacket or jeans as minimal protection from bites and open the garage door when ready. Zombies may come rushing in but just relax, turn on some music, and then when the door is clear drive out.

If you need gas, understand that many other people are trying the same thing you are doing and stores/gas stations may be highly crowded. Assuming that you are in a small suburban town you will have to make your way through a mess of a town, cars, and cadavers. After finding a quiet secluded station youâ??d stack up on gas and food. You may not actually find any food in the gas station so just go back to your car. Pull out a map and start driving towards the nearest coast.

Well now youâ??re probably very hungry. If you havenâ??t found a nice quiet place to get guns or food then you are pretty much screwed. Youâ??re going to have to start taking bigger risks for finding food. Remember that you can stop by a farm and load up on corn and vegetables, steal livestock, etc. Always stay on the lookout for guns, ammunition, and explosives. 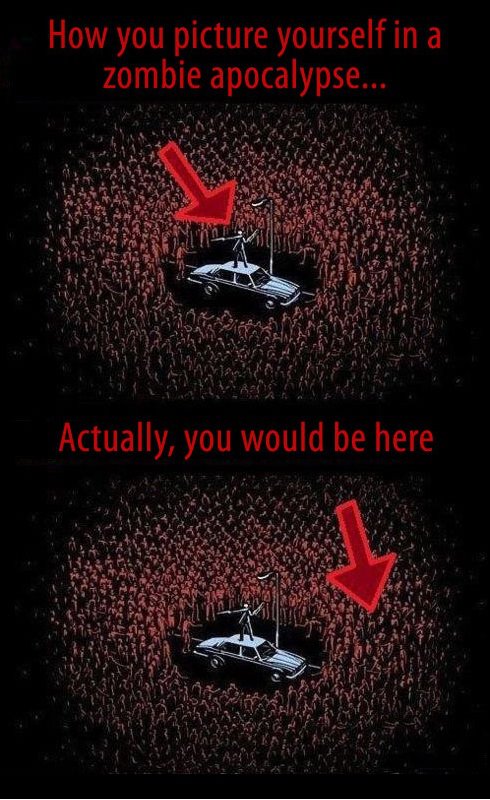 It shouldnâ??t take you longer than a week to arrive to a coast near you. You cannot enter a highly congested area without guns and a better car. Linger around in small towns and search for supplies. Hopefully you can find a car such as a Hummer or SUV. Have your son wait in the car providing an escape vehicle if there are too many zombies for you to handle. Eventually you will find a gun. Donâ??t even pick up a shotgun if you find one. It only takes two bullets at one time; itâ??s very loud, and very hard to reload while running from zombies.

Itâ??s been a couple of months. Youâ??re ready to enter the coast in search for boats. You encounter heavy groups of zombies but your car keeps cruising by. The only problem is that there are actually zero boats in harbor. Anyone living on the coast had gotten on a boat the second the zombies broke out. What did you do wrong? Well for starters you could have assumed that getting to the coast wasnâ??t an easy way out. Smart people think alike. Now youâ??re stranded without a boat for being smart.

So, you are stuck with two options. Either keep going north or south scanning for boats or head back into your country. There may be a possibility that there are still boats available on rivers connected to the ocean. Keep looking for boats and if you find one take it to the nearest isolated island.

If you canâ??t find a boat you can try making your way up into the north such as Canada or Alaska; where the cold kills off stupid zombies. Eventually the zombies will run out of flesh to consume at which point they will consume each other or starve to death. Zombies cannot reproduce as far as Iâ??m sure, so you could just wait it out. It may take anywhere from 6 months to 6 years but the Zombie populations cannot support themselves for ever.

Find a copy of Earth AbidesÂ by George R. StewartÂ and read every single word. Rebuild civilization. If there are other people already doing the same then make sure you play an important role in the new government. Take control of as much land and money as you can so you can get a second shot at life. 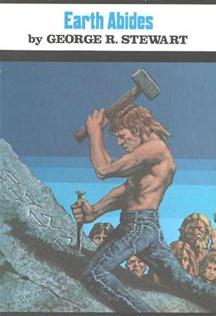 Rebuild civilization, and look good while doing it too!

Also donâ??t forget to visit your sonâ??s grave. He was eaten by a lion that escaped from the zoo while you were out searching for boats. The zombie world is a tough world and you may have seen too much. Consider if you would like finding a wife to start reproducing for society or if you will live a quiet and solitary life. Good luck!