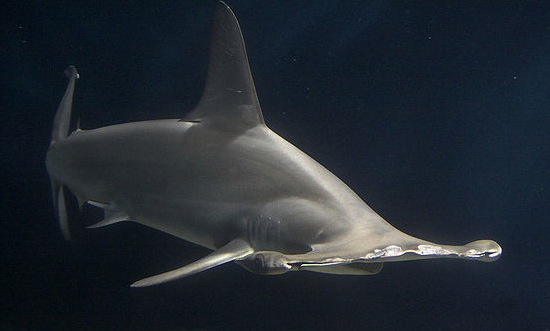 Very little in the sea scares people more than sharks.Even though there are quite a few worse threats if you go to the beach, such as getting a sunburn or having a jellyfish glue itself to your leg, there are many reasons that sharks appear as the greater threat.

Perhaps it’s the way they dance just under the surface of the water, with only their fin visible on top, or maybe it’s that when they do attack, it’s typically a vicious event, and they go in for the kill. Of course there are many types of sharks out there, some more dangerous than others, but perhaps the most unusual one is the hammerhead shark. This is a shark with a very visible and highly strange difference, the head is shaped like a hammer. Here is the information you may need in order to deal with them.

The head of a hammerhead shark is highly stretched horizontally, which is how this particular species got its name. It looks like a hammer, and can be recognized from far away. The family name is Sphynidae, and the most common location to find these types of sharks is around the waters Columbia, in South America, along with some islands to the south of Africa. These types of sharks like warm water, so they typically aren’t found in colder climates, where other types of sharks sometimes venture. They are also not that numerous, and have even become an endangered species over the years.

The hammerhead is typically around 10 to 1,200 lbs and can stretch up to 20 feet long. They are all grey and all have the same type of strangely shaped head. There is no conclusive evidence that would indicate why the head is shaped like that, but scientists think it may be so the shark can see better. By having an elongated head, it can cover a wider range and help it see farther distances. Sharks typically use a process called electroreceptory in order to find food, where they bring their heads back and forth to sense electromagnetic signals in the water. By having this type of head, it helps the hammerhead sense better.

Interestingly, not a lot of actually hammerheads are out on display since sharks do not have strong bones to leave behind a skeleton. In fact, the hammerhead is now a protected type of shark against fishing because of how rare it has become. If it goes extinct, this may well be the last sight of such a strange looking creature. There are still a few thousands of them in the oceans, but this could be reduced quickly if fishing were to resume against them.

In all, 33 attacks have been recorded against humans by hammerheads. None were said to be fatal. So, the answer is yes, they can attack if they feel threatened, but they do not eat people and there have been no recorded deaths. Instead, this shark typically eats fish, squids and crustaceans. Scientists have even observed the hammerhead eat other types of sharks. A separate species, the Great Hammerhead, is especially aggressive and can eat whole sharks by itself.

Click here to find out how to survive a shark attack . . .