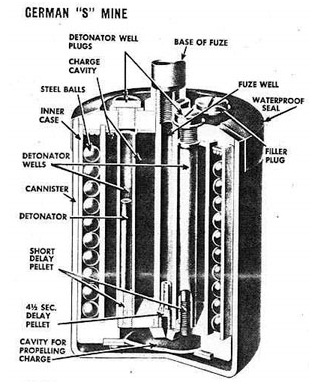 What was the ‘Bouncing Betty’ or ‘S-Mine’ as it is also known as?

Picture this, you are walking along and all of a sudden a cylindrical object bounces up four feet into the air behind you. It doesn’t kill you but you are severely maimed, as well as injuring others around you. What happened? You just stepped on a Bouncing Betty . . .

The Bouncing Betty was first used in World War 2 in the 1930s and was a cylindrical object buried beneath the ground with wires sticking up. When you stepped on the mine and tripped it, the mine would bounce up into the air and explode. Steel balls or metal would then tear through the poor victims body. The fact that it could bounce up into the air meant that the explosion could deal more damage.

The Germans developed a particular type of Bouncing Betty mine called the ‘S-Mine’ which had around 350 steel balls that would blast out at a deadly radius of 165 yards. This was the first mine of its kind.

These mines don’t trigger until you step off the mine.

This type of mine was an anti-personnel mine and it’s real effectiveness was that by laying down these mines it would slow the enemy’s advance down to a snail’s pace. The mine was feared by troops, as the devastation it caused was more than you’d get with a standard mine below ground. The Bouncing Betty’s blast radius could injure multiple amounts of troops. The psychological stress for troops advancing knowing that their enemy had placed these mines was intense.

Although the Bouncing Betty was developed in the 1930s, they have been used in more recent wars. For instance, they were used in the Vietnam war.

In WW2 Germany under the influence of the Third Reich produced nearly 2 million S-Mines. S – Mines were even deployed along the beaches of Normandy to slow down any possible invasion.

This mine was particularly nasty as it was not necessarily employed on the battlefield to kill enemy soldiers, rather it was intended to seriously maim soldiers over a wide blast area, therefore slowing advances and producing psychological stress.

The German S-Mine was around 5 inches tall and around 4 inches in diameter and held a main fuse on top where the trigger sensor was attached. S-Mines used TNT as it’s explosive. The S-Mine needed around 7 kilograms of weight or more to trigger, so as not to be triggered by wildlife.