Apple’s mobile software, iOS, has notÂ receivedÂ a major update since it’s debut in 2007. It’s obvious that the system was starting to not only look outdated, but also feel outdated. After all, 6 years in technology time is like 60 years in human time. Since the first version of iOS Â came out, two new operating systems (Windows and Android) were released and upgraded over the years. Windows is becoming known for its simplicity and “flat” design, while Android on the other hand is becoming known for its flexibility.

So it’s noÂ surpriseÂ that Apple’s stagnation has started to worry consumers and investors. This is clearly seen in Apple’s 5% stock drop after the iPhone 5 was unveiled.Â What’s reallyÂ interestingÂ is how Apple’s CEO decided to put the company back on track. The first thing he did was fire Scott Forstall. Forstall was the reason that iOS 6’s maps program failed so terribly. Not to mention that Forstall didn’t take blame for his mistakes in the maps software, and he was also known to have issues collaborating. With Forstall out of the way Tim Cook need to fire another long overdue thing at Apple. iOS 6.

Tim Cook is the main reason that iOS 7 looks the way it does now. The old iOS design was based on Steve Job’s love for skeuomorphism. This means that the design of apps would follow physical objects for the sake of “looking good.” That’s why the Newsstand app had wooden shelves, or Game Center had a green pool table pattern. The designers at Apple weren’t too fond of skeuomorhpic design andÂ neitherÂ was Tim Cook:

For iOS 7, Apple’s designers were left with the difficult task ofÂ simplifyingÂ everything. You can decide whether this simplification is good or bad yourself: 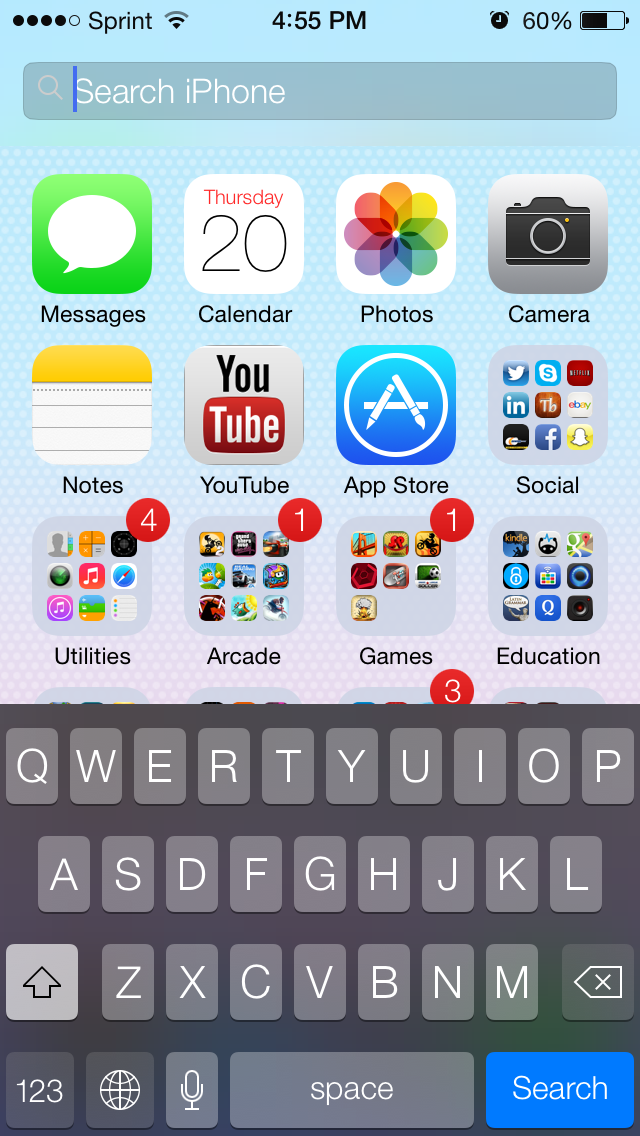 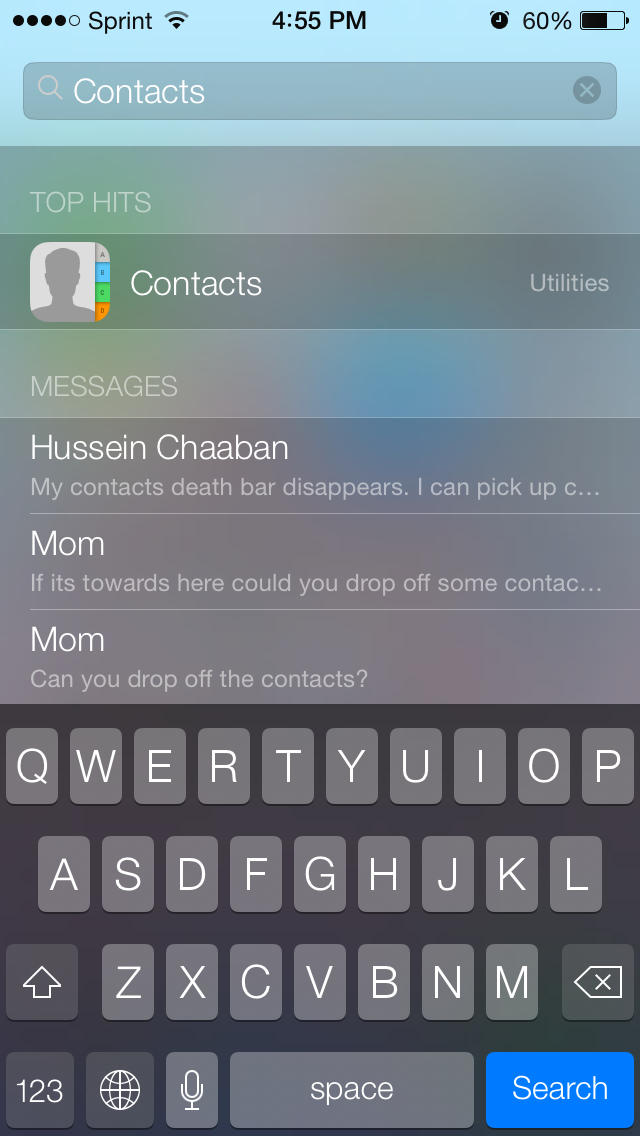 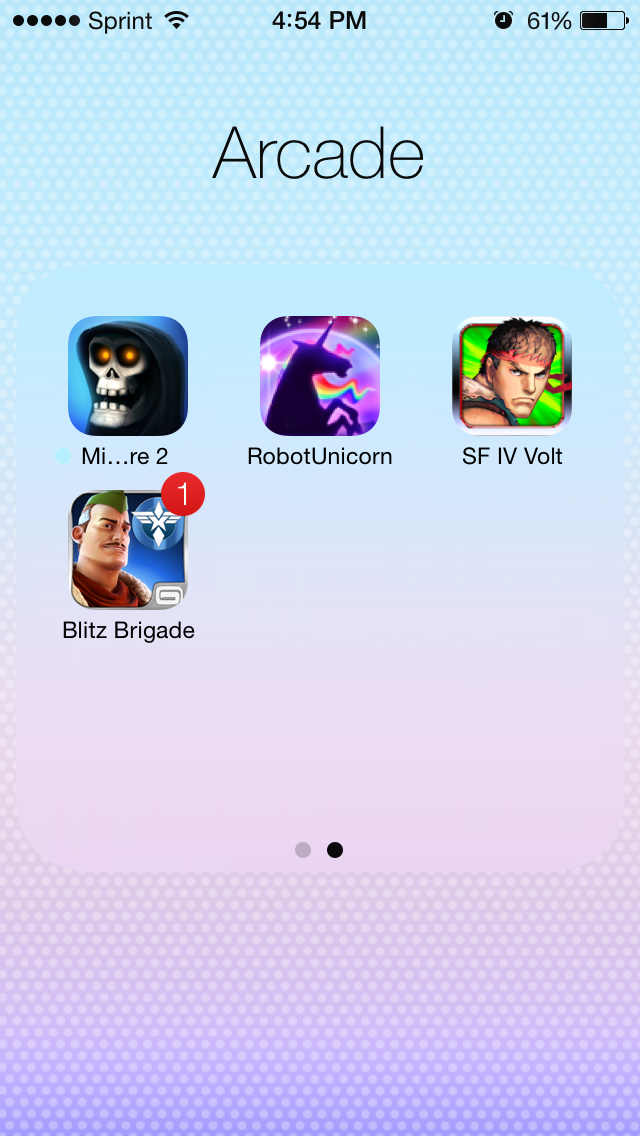 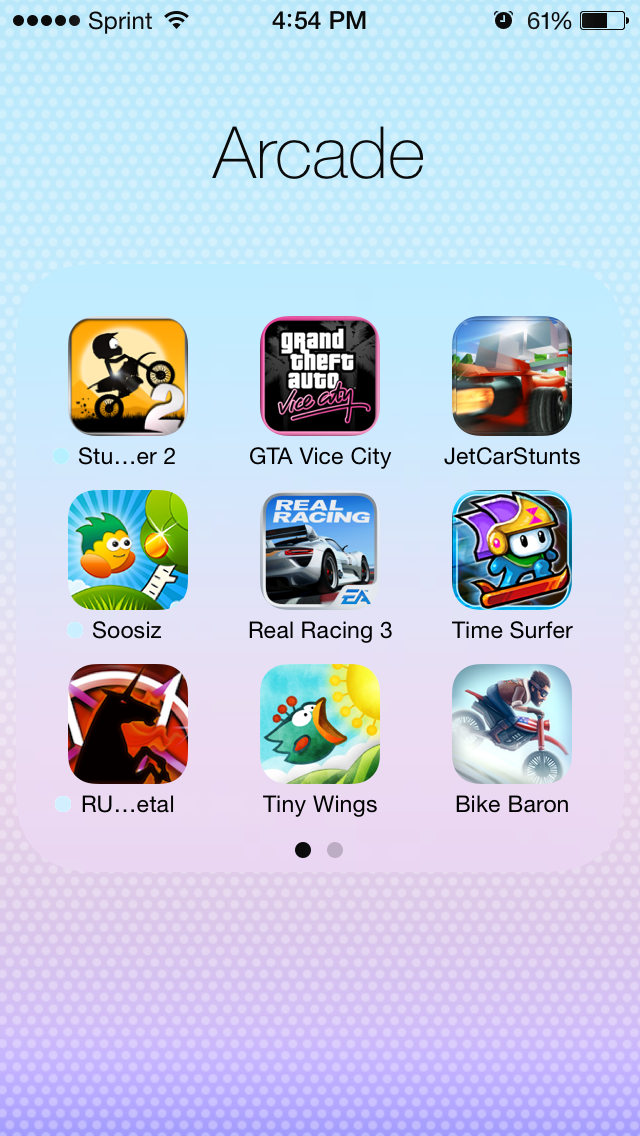 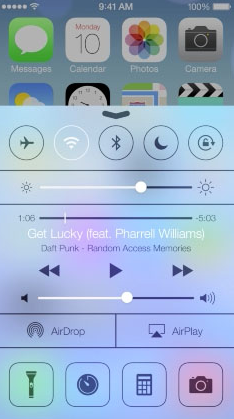 The new Springboard allows you to get to the search page by simply swiping up. You can no longer get to it by swiping all the way to the left page. Also folders now have pages themselves. So you can put a whole lot more apps into them.

If you swipe up from the bottom of the screen on any app, page or even theÂ lock-screen, a “control center” will come up. Although this is a great feature, I don’t like it too much. Primarily because the play, rewind, forward and song buffer line show up on my iPhone that has no songs on it. I don’t see why the control center can’tÂ recognizeÂ this and just hide these song buttons. 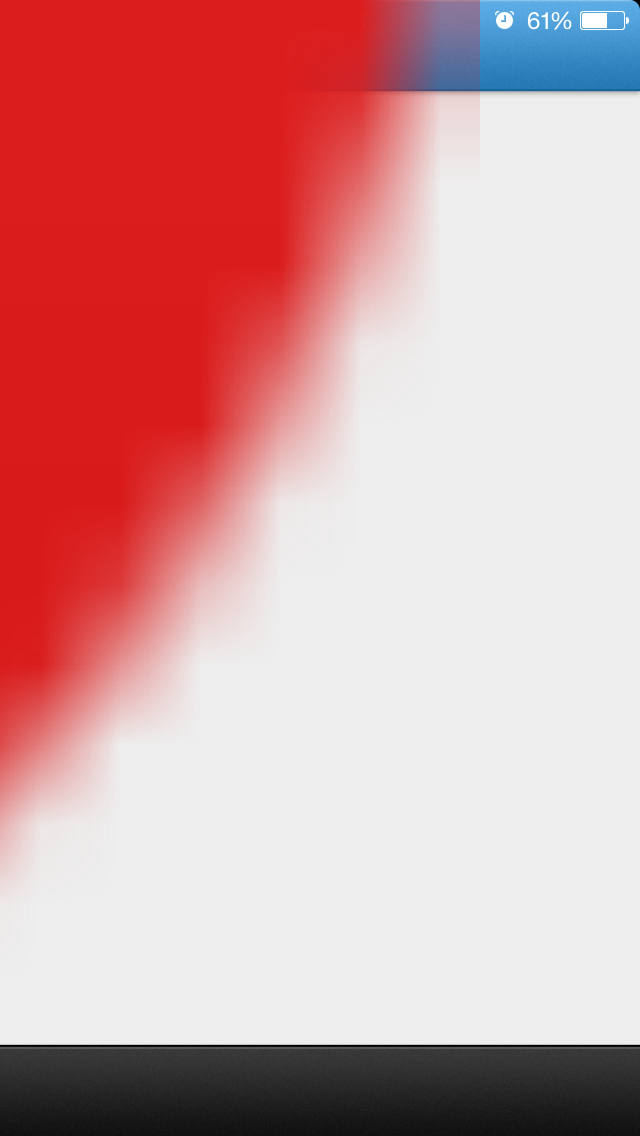 When you open apps now there’s an animation that enlarges the app icon into the app screen. However this is kind of buggy, and as you can see in the image above, the red circleÂ notificationÂ remains over apps for a couple of seconds after opening them. 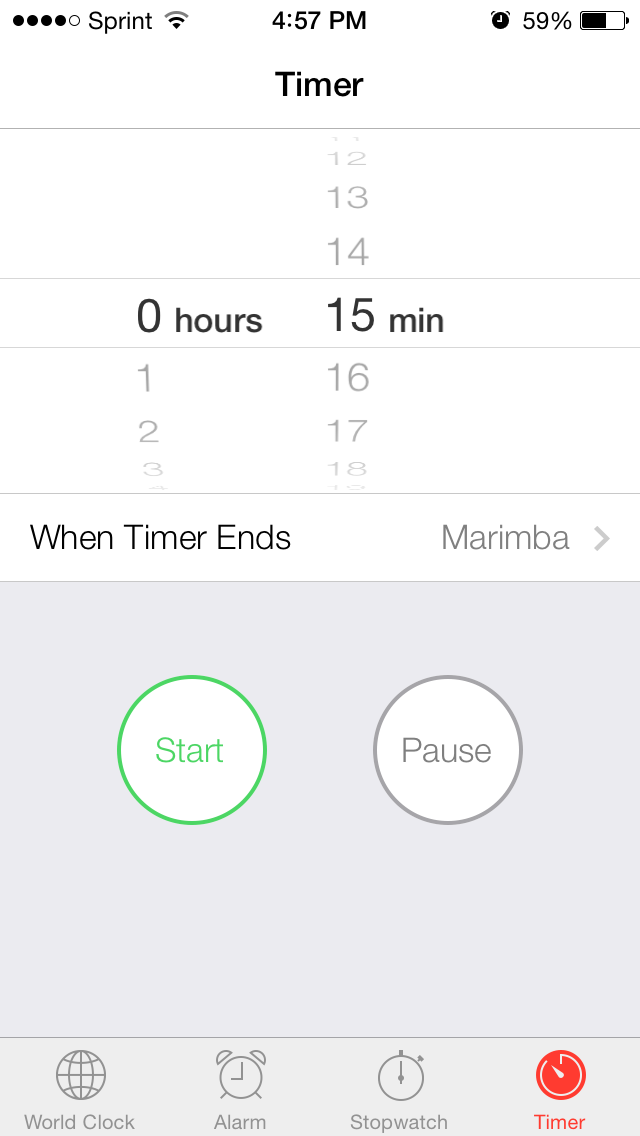 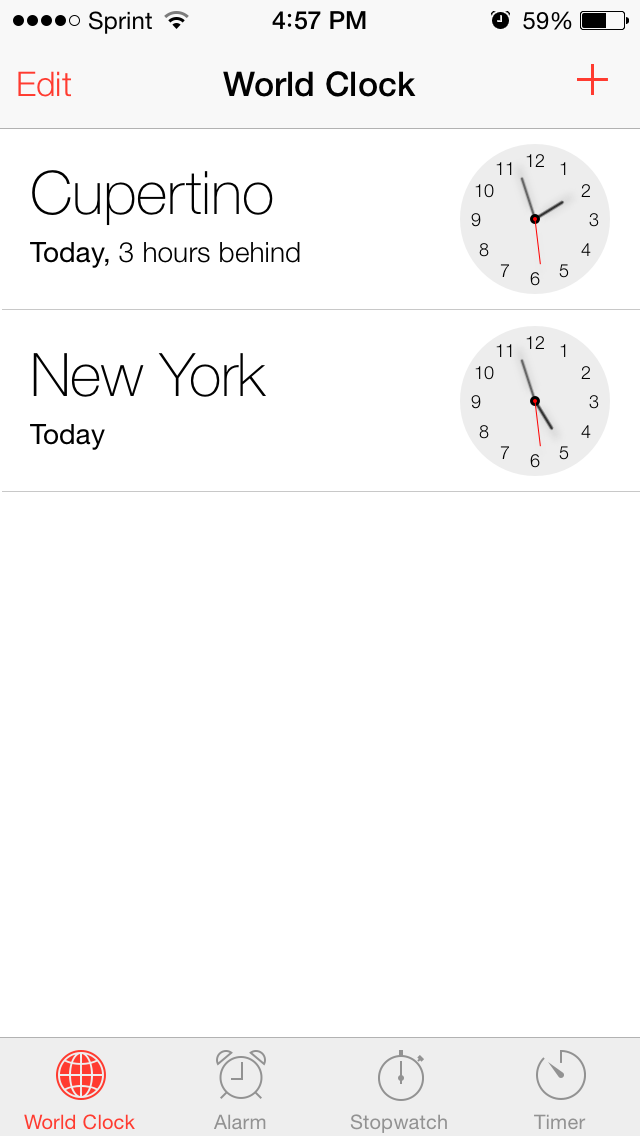 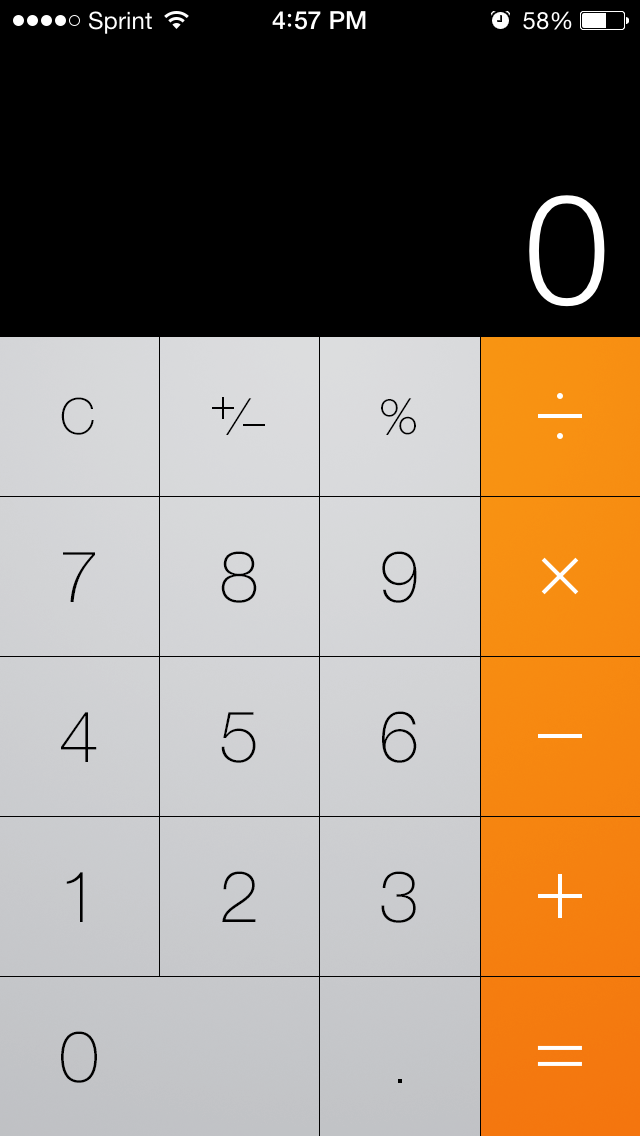 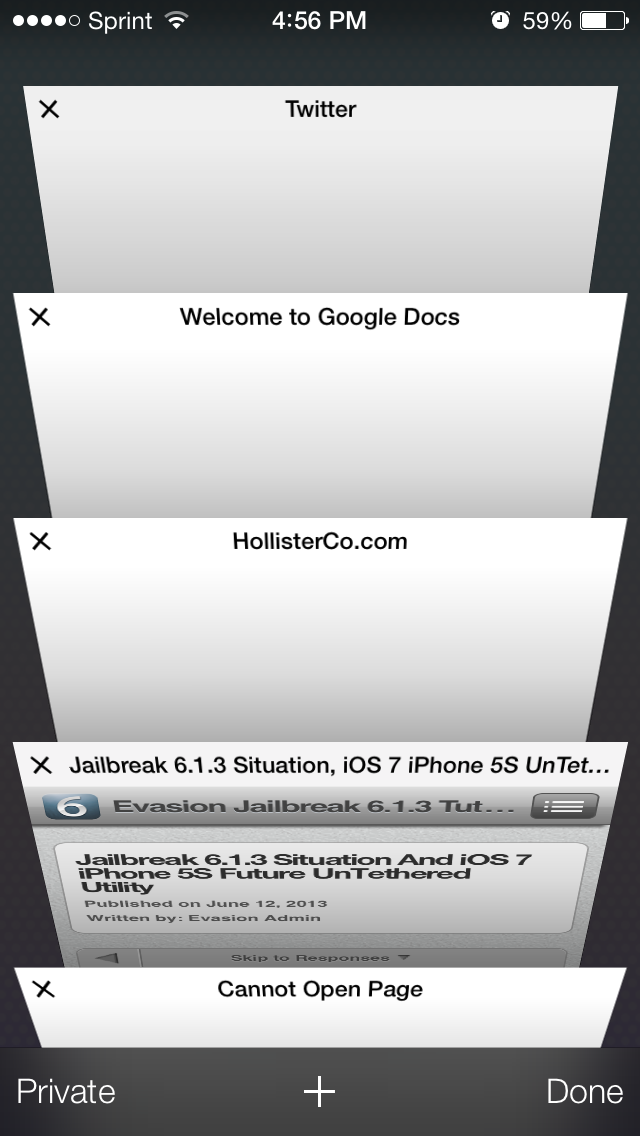 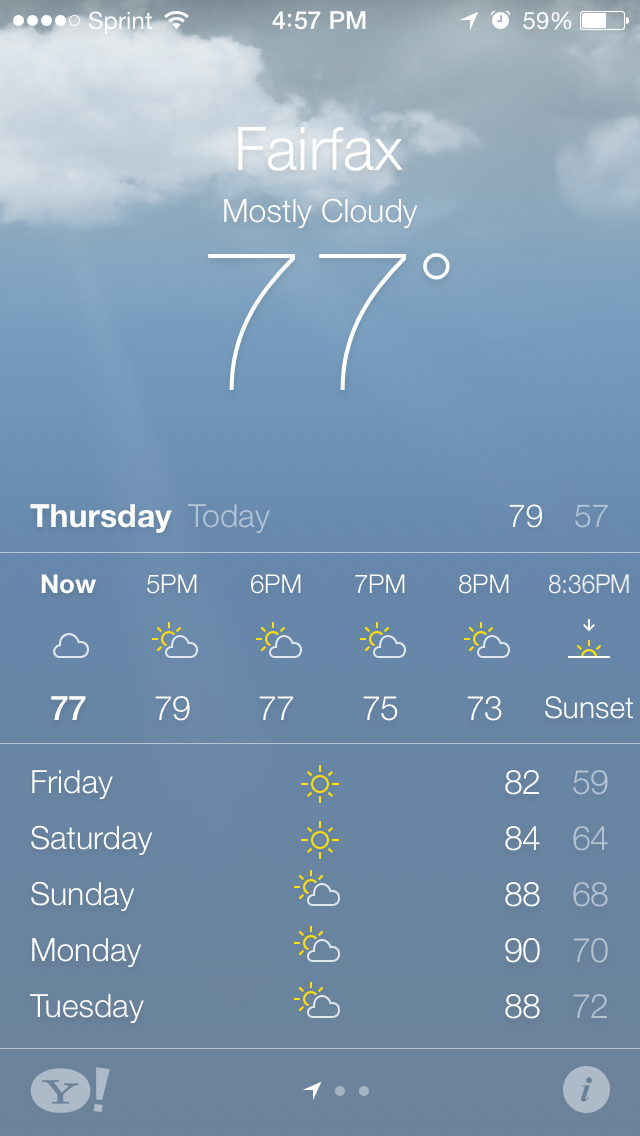 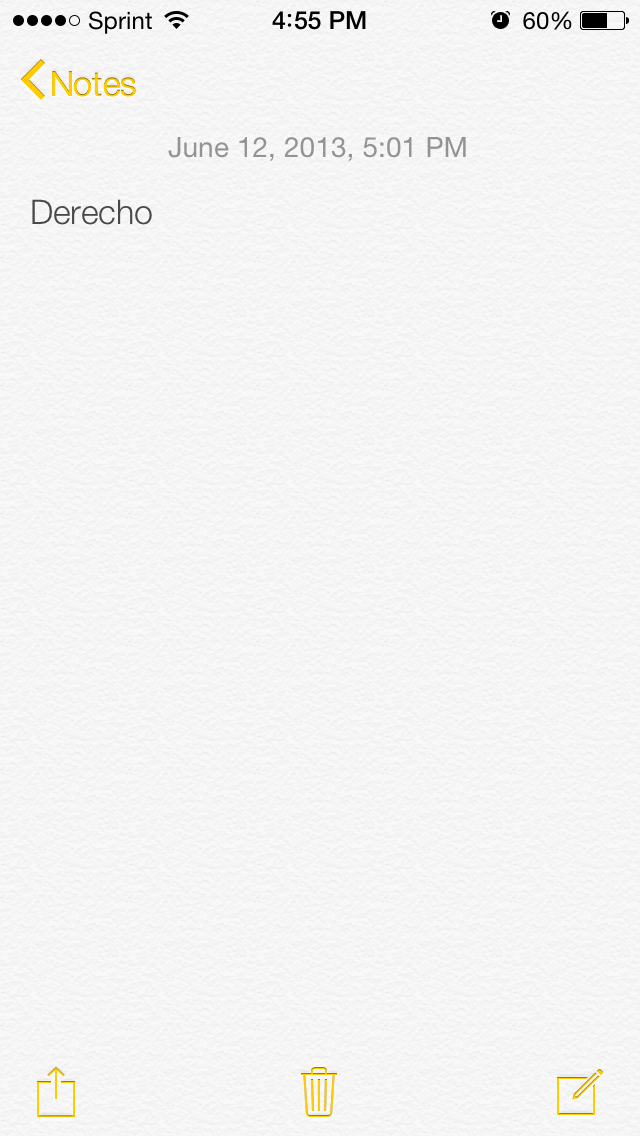 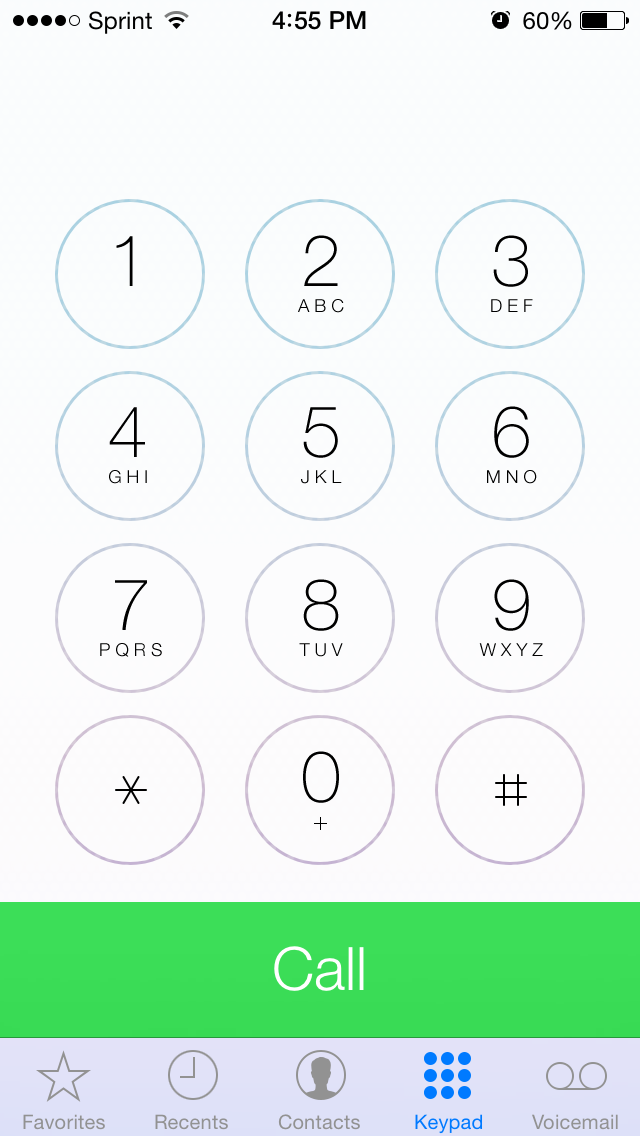 As you can see in the screenshots above, all of the stock apps have been updated to look more “flat.” I personally think all of these new apps look like a lot of Windows/Google products. But that’s just me… At any rate this style of design isn’t revolutionary or first “discovered” by Apple.

When using iOS 7 I’ve had issues with the contact app, phone app and text messaging app. When I open up the phone app, the call buttons and keypad all flash weird color tones. I’m not sure if it was designed to do this or not, butÂ either wayÂ it doesn’t look good.

Also the text messaging app and contact app often overlay layers or text in ways that looks as if something is broken. You can see an example below: 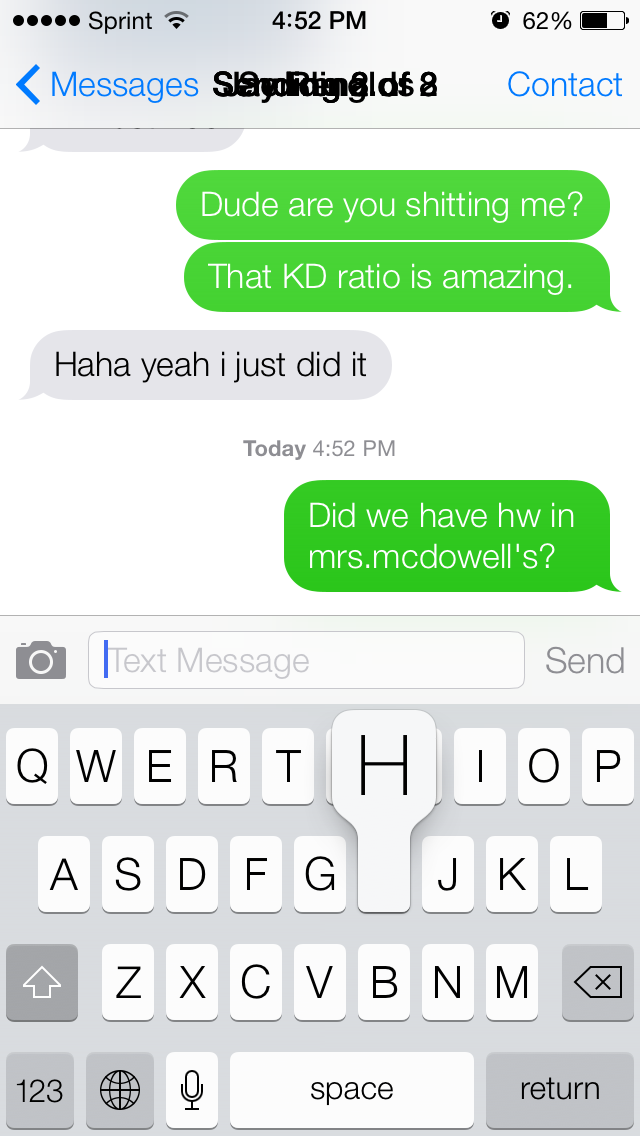 The keyboard has also been updated. But when using other apps such as Google Chrome or MapMyRun, I’ve had the iOS 6 keyboard come up. It kind of breaks the whole “iOS 7” illusion by letting you know something is not right. You also feel as if a lot of iOS 6 has just been “re-skinned” in iOS 7, instead of Apple developing iOS 7 from the ground up.

*Note* It would actually be impossible to develop software as huge as iOS 7 from “the ground up.” What I mean by this term is to start from a blank state from a design perspective. Don’t bring iOS 6 skeumorphic keyboards into an iOS 7 flat design. It just doesn’t make sense. There should be no reason for iTunes to even put the old keyboard design on your phone when you upgrade to iOS 7.

That’s what Windows did with Windows XP and Windows 7. They kept on loading on 5 year outdated andÂ obsoleteÂ libraries and software. It just doesn’t seem like Apple to be so sloppy in their designs. Maybe this is because Apple no longer has an overbearingÂ Â boss with an eye for perfection that makes sure everything stays on track.

With Steve no longer with us, this has to be watched carefully by someone who realizes the chaos and turbulence around an inventor/creator is a GOOD thing especially when properly supported. I still think firing Scott Forstall was an epic mistake even if the work place is “easier” with his absence. Without Steve, without Bertrand Serlet, without Scott Forstall, who will be the son-of-a-b*tch who pounds on the table and speaks up when a product is heading dangerously down the path to mediocre. -robertholtz

It seems as if there’s a paradox between Tim Cook firing Forstall and wanting to improve the products Apple creates. With people like Forstall around, things get done. Because he is so demanding people call him a “non-collaborator.” This so-called “non-collaboration” got Forstall fired. But Fortall’s rigid standards for products was also important to delivering things that worked.

Someone might point out that Forstall also messed up the maps software. Well to that I’d have to say this: Didn’t Steve Jobs also get fired from Apple for being disliked by theÂ employees? Didn’t he also have failed products (aka his company NEXT)?

Without people like Steve Jobs or Forstall around to keep the company moving in the right direction at no matter what costs, Apple’s future doesn’t seem too good. 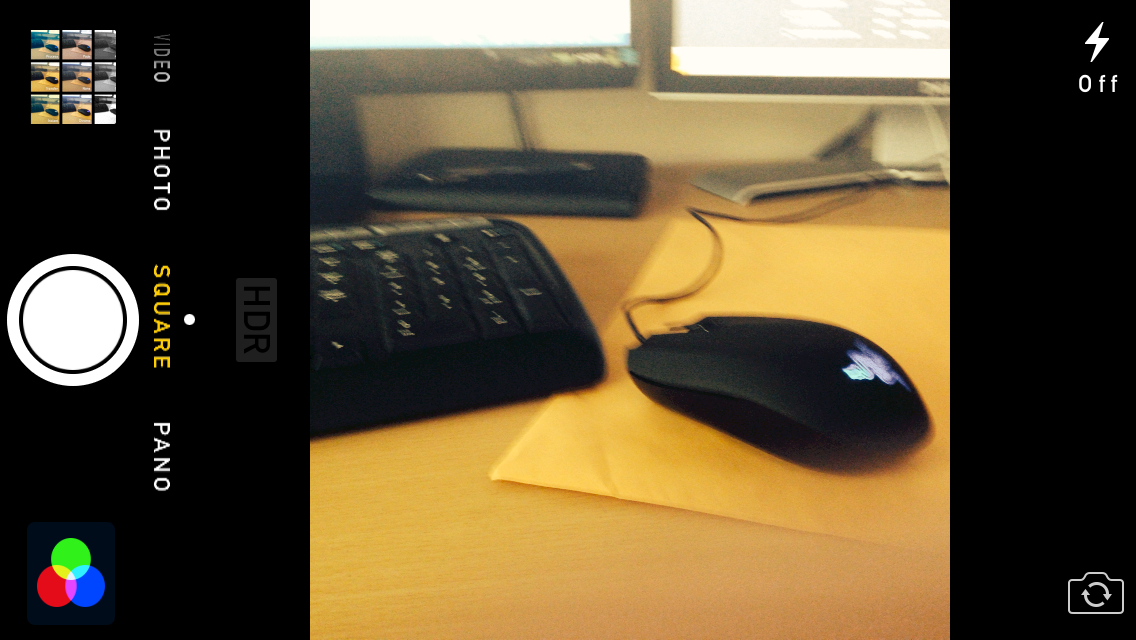 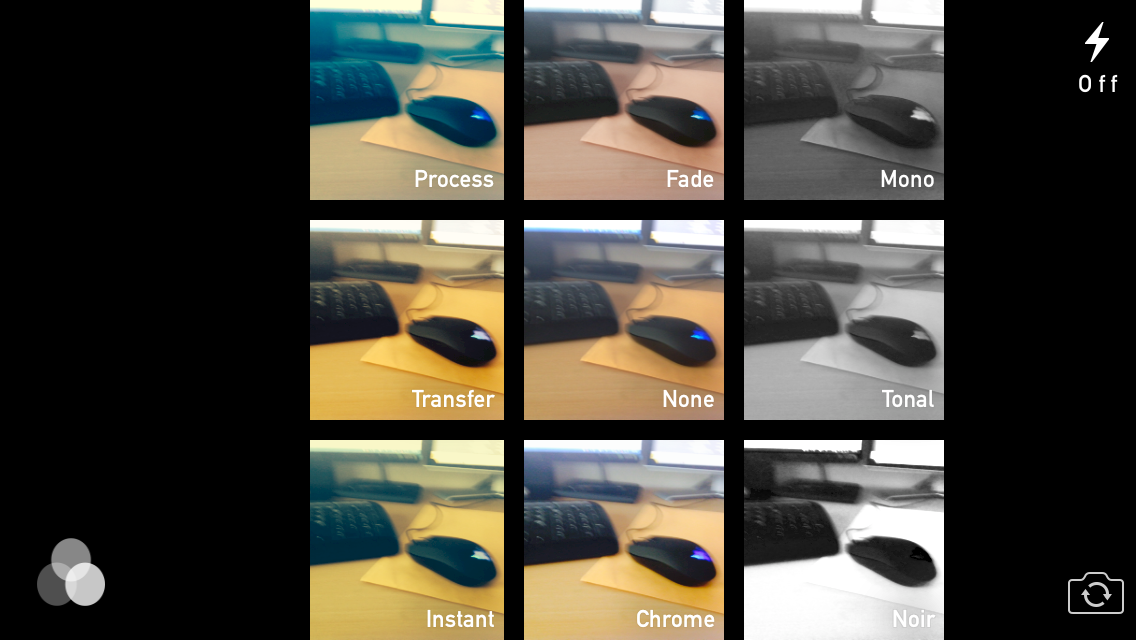 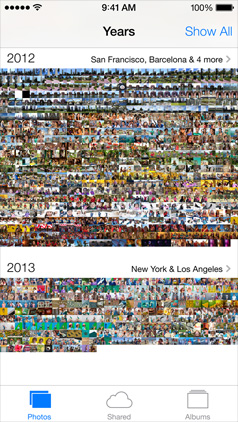 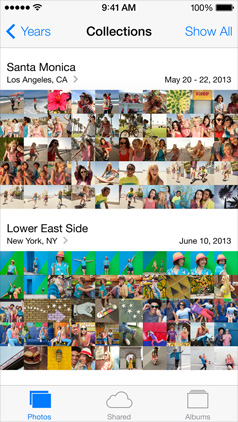 The new camera app now comes with built in filters. Also you can slide from left to right to switch photo aspect ratios, or even to switch between the camera and the video camera.

As for the photo library: It can nowÂ displayÂ photos in grouping created by the years or places the photos were taken in. 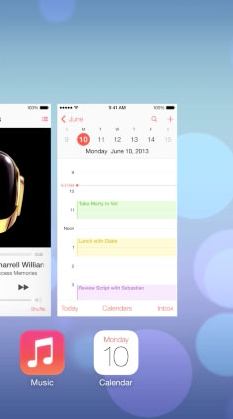 The new multitasking feature isn’t tooÂ interesting. It may lookÂ interestingÂ but this is a pretty late feature for Apple to release. Android has had this same exact functionality for years now. In the photo above you can see how the updated multitasking system works. You can basically preview open apps, and you can also swipe up on them to close them.

It seems as if the design of iOS 7 was spurred by no reason. The design was changed merely to change the design. Isn’t that the same thing skeuomorhpic design is? Design based on real-life objects for the sake of design? These new appearance changes may satisfy some customers and geeks out there. But only time will tell if it also satisfies investors.

The work put into iOS 7 isn’t too promising. Hopefully it doesn’t spell a trend for future iPhone and Apple products to come.